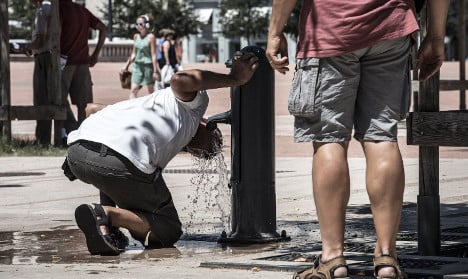 File photo: AFP
The warning from national weather service Météo France says the heatwave will hit from Monday afternoon in seven départements around the Loire Valley and Aquitaine, where temperatures are expected to reach between 35C and 38C.

An update later in the afternoon raised the number of départements on alert to 12. Temperatures of up to 35C will affect Paris, Burgundy and the Rhone Valley on Tuesday. The rest of France will experience temperatures of up to 30 degrees.
Météo France said the heatwave would bring “short but very severe periods of heat, requiring particular vigilance.”
The départements covered by the warning are Charente, Indre-et Loire, Maine-et-Loire, Deux-Sèvres, Vendée, Vienne, Haute-Vienne, Allier, Charente-Maritime, Mayenne, Puy-de-Dôme, and Sarthe.
READ MORE: How to keep cool during France's heatwave The weather service warned that old people, people with chronic illnesses, people with psychiatric illnesses and people on medication were particularly vulnerable to the effects of the heat. It also warned people to monitor children for ill effects. People who work outside or who plan to play sports should keep hydrated and watch out for heat stroke.
The affected area around the Loire Valley and Acquitaine is popular with summer tourists, who flock to the castles of the Loire Valley and the many vineyards of the region.
Cooler air from the sea is expected to relieve the west of the country on Wednesday, but the hot air is expected to linger over eastern parts.
READ MORE: Here's how to enjoy Paris (while avoiding the heat)