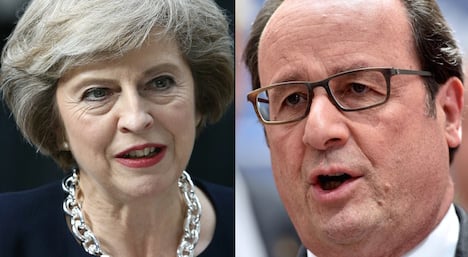 They are May's first foreign visits since she became prime minister last Wednesday in the wake of Britain's referendum vote to leave the European Union.

Incoming British premiers normally make early visits to establish personal links with key European leaders, but this week's trip will be highly charged by the referendum outcome and the need to forge a new relationship between Britain and the continent's major powers.

After taking her first weekly prime minister's questions session in the British parliament at midday (1100 GMT), May will travel to Berlin for a meeting and a working dinner with Merkel.

“This will be an opportunity to discuss the bilateral relationship, cooperation on a range of global challenges, and of course how the UK and Germany can work together as the UK prepares to leave the EU,” the spokeswoman said.

Then on Thursday, she will visit Paris for a meeting with Hollande at the president's Elysée Palace official residence.

“The talks are likely to cover similar issues as those in Berlin, as well as Thursday's attack in Nice and counter-terrorism cooperation,” the spokeswoman said.

Elysée sources said May would be due in Paris late on Thursday, with three subjects on the agenda: external security and the battle against terror; implementing Brexit and the importance of Franco-British relations.

The result of the June 23 referendum sent shockwaves through Europe.

In Britain, Prime Minister David Cameron – who, like May, backed the UK staying in the EU – stepped down.

May, who had spent six years as Cameron's interior minister, became leader of the governing centre-right Conservative Party following a short contest, before taking office.

Top Brexit campaigner and former mayor of London Boris Johnson, her surprise choice as new foreign minister, was in Brussels on Monday for talks with his EU counterparts.

He said Britain would continue to play a leading role in Europe.

“We have to give effect to the will of the people and leave the European Union but… we are not going in any way to abandon our leading role in European participation,” Johnson told reporters.

EU leaders insist Britain's negotiations for its departure from the bloc can only start once London invokes Article 50 of the EU's Lisbon Treaty, setting a two-year countdown on the divorce.