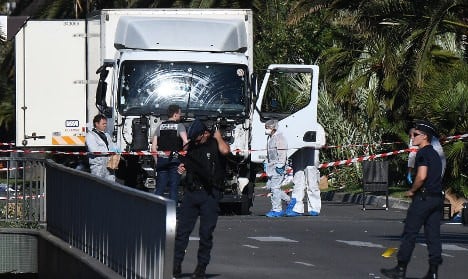 A man spits at the site in Nice where the truck driver was killed by the police. Photo: AFP
Investigations showed the Tunisian had searched on the internet for information on a terror attack on a gay nightclub in Orlando and the Paris suburb of Magnanville — where a police couple were killed last month.
Molins said the attack was “of a premeditated nature.”
Bouhlel staked out the site of the carnage in Nice, the Promenade des Anglais, on several occasions, took selfies there throughout the day of the attack and had reserved the rented truck on July 4th.
Since July 1st, he had also made several internet searches for “horrible fatal accident” and had on his computer violent images “linked to radical Islam”.
Investigations also showed he had grown a beard eight days before the attack, telling people “the meaning of this beard is religious”.
Authorities believe Bouhlel was radicalised very quickly, as he had never shown signs of religious fervour until recently.
According to Molins, the attacker drank alcohol, ate pork, took drugs and engaged in “unbridled sexual activity.”
The Islamic State group claimed responsibility for the attack earlier, saying that one of its “soldiers” carried out the attack in response to its calls to target countries from the US-led coalition engaged in airstrikes against the group.
Investigators were not initially convinced by the claims.