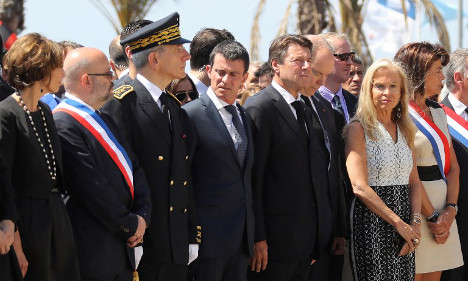 Prime Minister Manuel Valls was booed on Monday in Nice. Photo: AFP
Valls and two ministers attending a ceremony of remembrance endured a humiliating chorus of boos, along with shouts of “Murderers!” and “Resign!”
The anger is reflected in France's politics, where the opposition – which once united with the government in past outrages – has gone on the attack as presidential and legislative elections loom.
After the third major attack in 18 months former president Nicolas Sarkozy, who is eyeing another run for the top job in 2017, did not hold back.
The leader of the centre-right Republicans party accused President Francois Hollande – nicknamed “Flanby” by detractors after a brand of wobbly custard – of “trembling” in the face of the jihadist threat.
“Everything that should have been done the past 18 months was not done,” Sarkozy said in an interview with TF1 television on Sunday.
“France cannot let its children be murdered,” he said, declaring the country to be in an “outright war.”
“It will be us or them,” he added, calling for all foreign-born terror suspects to be deported.
Usually more measured, Sarkozy's rival for the presidential nomination of the centre-right Republicans party, Alain Juppé, also wasted no time in accusing the Socialist government of being lax on safety.
Within hours of Mohamed Lahouaiej Bouhlel, a 31-year-old Tunisian national, ploughing his truck into a crowd of people leaving a fireworks display, killing 84, Juppe declared it “would not have happened” if security had been tighter.
In the far-right camp, National Front leader Marine Le Pen accused successive governments of the left and right of “grave mistakes” for “continuing to allow so many foreigners into France”.

Unity no more
The contrast with the shows of unity that prevailed following the two previous attacks was strident.
After jihadists struck Paris in January 2015 politicians marched shoulder to shoulder in solidarity, behind Hollande and a host of world leaders.
Following the devastating attacks 10 months later on the national stadium and Paris nightspots they again stood together, for a moving rendition of the national anthem in parliament.
But with the country preparing for presidential elections in April and May, followed by legislative elections in June, the political mood has become more poisonous.
The government was already thrust onto the defensive on July 5, when a parliamentary inquiry concluded that the 2015 attacks represented a “global intelligence failure.”
Hollande's abysmal approval ratings briefly rallied after the previous attacks.
But an Ifop poll in Le Figaro daily on Monday showed only 33 per cent of the people trusting him to protect them this time round.
“His humanity, his quick reaction, his authority were praised in January and November. Now, he has no more cards to play,” Frederic Dabi of Ifop pollsters told Le Figaro newspaper.
Cazeneuve has rejected any suggestion of intelligence failings in the case of the Nice attacker, noting he had no known links to jihadist networks and appeared to have been radicalised very recently.
Security analysts also note how hard it would have been to have stop a “lone wolf” attack with a low threshold of technology.
Bouhlel's deadly weapon was not a bomb or a machinegun but a truck – an arm that could be used by any would-be assailant with the appropriate license.

Faced with such problems, Valls has sought to steel the French for further such attacks, warning: “Terrorism will be part of everyday life for a long time to come”.
He has also appealed for unity and dismissed the “disgraceful” boos in Nice as the “attitude of a minority”.
“The 'Trumpification' of the mind cannot be our response to Isis,” he said referring to anti-migrant discourse of US Republican White House hopeful Donald Trump.
But the calls fell on deaf ears in Nice, with mourners in the Republicans-run city issuing calls for both Valls and Hollande to resign.
Political analyst Stephane Rozes pinned the hostility in Nice on the “demagoguery” of a camp within the main opposition party “that led people to believe that you can avoid such terrorist acts”.
“Most French people understand all too well that you cannot stop a man climbing into a truck and ploughing into a crowd,” he said.
Those in the opposition who claimed otherwise “are playing into the hands of the FN and digging their own graves because people prefer the original to the imitation.”