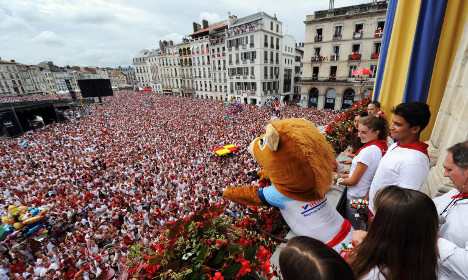 Photo: AFP
The Fêtes de Bayonne, which pulls in one million festival goers a year, is a highlight on the calendar of south-western France.
It features everything from live music to bull running and has been described by organizers as the fifth biggest festival in the world.
But this year's festival was at risk of being cancelled after 84 people were killed by a truck that crashed into a crowd in Nice last week.
Given that the attack targeted innocent people in a large celebratory crowd, there have been understandable fears about the security at the Bayonne festival too.
Authorities on Monday, however, insisted the event would go ahead as planned from the 27th-31st of July, albeit amid a tightened security. (Red and white as far as the eye can see in Bayonne. Photo: AFP)
“We have taken into account the increased threat, but we have no evidence at this stage that we should cancel the festival,” local police chief Pierre-André Durand said.
He added that cancelling it would be “giving in to terrorists”, reported France Bleu.
It remains unclear exactly what the increased security measures will include, but authorities promised more details on Thursday.
This year's festival in Bayonne promises to be a big one, with the event celebrating its 80th anniversary.
The five-day festival is known for being a blur of parades, dancing, and good food.
Andy Fisher, a guide working for the local tourist office, told The Local last time around that the event was quickly becoming “one of the biggest festivals on the planet”.
“There's everything you could want in a festival and a huge variety of activities. It's a real excuse for a good knees-up for all generations,” he said.
READ MORE: The Bayonne festival – France's wildest party