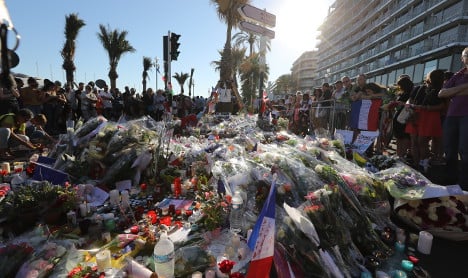 At least 10 children were among the dead. Photo: AFP

Mohamed Lahouaiej-Bouhlel visited the Nice promenade with his rented truck on the two days before he smashed the vehicle into a crowd of people watching Bastille Day fireworks in the French Riviera city on Thursday night, according to a source close to the probe.

Mangled bodies were left strewn across the storied seafront, including children, in the grisly attack by a man described by those who knew him as a loner with tendencies towards violence and depression.

In Nice, many people were still desperately looking for news of their loved ones among the dead and 121 still hospitalised.

“We have no news, neither good nor bad,” said Lithuanian Johanna, who was looking for her two friends, aged 20.

At least 10 children were among the dead as well as tourists from the United States, Russia, Ukraine, Switzerland and Germany.

As the promenade re-opened and Nice struggled to come to terms with the horror of the attack, police had questioned hundreds of people who knew the Tunisian, said the investigative source, speaking on condition of anonymity.

A man and a woman were arrested on Sunday, and another five people including his estranged wife were still in custody.

While he had a record of being a petty criminal, Lahouaiej-Bouhlel had never appeared on the radar of intelligence services for links to radical Islam.

Interior Minister Bernard Cazeneuve said Saturday the father-of-three “seemed to have been radicalised very quickly, from what his friends and family” have told police.

Several people have told police that Lahouaiej-Bouhlel, 31, had shown signs of being religious, despite previous reports from those who knew him that he smoked, drank and never went to the mosque, said a source close to the investigation.

People who went to the same gym as Lahouaiej-Bouhlel — where he did salsa dancing and lifted weights — described him as “conceited” and someone who “would flirt with anything that moved”.

The Islamic State group claimed responsibility for the killings, saying that one of its “soldiers” carried out the attack “in response to calls to target nations of coalition states that are fighting (Isis)”.

Cazeneuve described the massacre as “a new kind of attack” which highlighted “the extreme difficulty of the anti-terrorism fight”.

“We are now confronted with individuals open to Isis's message to engage in extremely violent actions without necessarily having been trained or having the weapons to carry out a mass (casualty) attack,” he said.

France's third major Islamist attack in the past 18 months has left Paris fending off criticism over security failures and scrambling to reassure its citizens they are protected.

Cazeneuve called for volunteers to boost security forces who have already been reinforced and on high alert under an eight-month state of emergency.

“I want to call on all French patriots who wish to do so, to join this operational reserve,” said Cazeneuve of a force currently made up of 12,000 volunteers aged between 17 and 30.

France's “operational reservists” include citizens with or without military experience as well as former soldiers.

“In any other country in the world, a minister with a toll as horrendous as Bernard Cazeneuve — 250 dead in 18 months — would have quit,” she said.

Isis also claimed responsibility for the November 13th attacks which killed 130 people in Paris, while gunmen in January 2015 attacks on the Charlie Hebdo weekly and a Jewish supermarket were linked to both Isis and Al-Qaeda.

France is a prime target of Isis, for its role in fighting the group in Iraq and Syria, its cherished secular values, and what the government has admitted is a “social and ethnic apartheid” that alienates its large Muslim community.

Hundreds of French jihadists have gone to fight alongside Isis in Iraq and Syria.

Those inspired by Isis from afar with no links to jihadist networks create a massive headache for intelligence services.

French Defence Minister Jean-Yves Le Drian noted that Isis had recently repeated calls for supporters to “directly attack the French, Americans, wherever they are and by whatever means”.

“Even when Daesh is not the organiser, Daesh breathes life into the terrorist spirit that we are fighting,” he said, using an Arabic name for Isis.