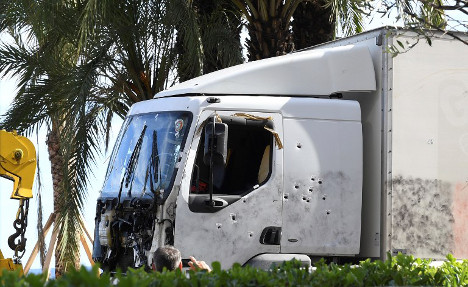 How did the attack unfold?

Some 30,000 people had gathered on the glitzy beachfront avenue, the Promenade des Anglais, to watch a firework show for France's national day.

Anti-terror prosecutor Francois Molins said the driver fired “several times” on three police officers as they tried to bring the truck to a halt, and eventually shot him dead.

It later emerged that the killer had checked out the scene on the two days previous to the attack in his white truck. Details of the assault

The truck pulled onto a section of roadway that was open to traffic despite the fireworks. Agents watching via the city's network of surveillance cameras quickly spotted the vehicle because heavy trucks are not allowed in the area.

Though the pedestrian area was protected by metal barriers and police cars, the truck “forced its way onto the footpath” according to authorities. Travelling at 90 kilometres per hour (55 mph), the truck blasted through the obstacles.

In order to stop the truck “you would have needed a concrete wall”, said an official. City Hall authorities noted that barely 45 seconds later the attacker was shot dead by police. Who was the assailant?

Molins named the driver as a 31-year-old Tunisian, Mohamed Lahouaiej-Bouhlel, who lived in Nice, and was described by neighbours as a loner who never responded to their greetings.

His identity papers were found in the truck, along with a pistol and ammunition and a number of fake weapons including two replica assault rifles.

His body was found on the passenger seat, said the prosecutor.

Molins said Lahouaiej-Bouhlel had had various brushes with the law since 2010 for making threats, theft and violence, including a conviction in March this year for which he was given a six-month suspended sentence.

But he was “totally unknown” to the intelligence services, said Molins.

His estranged wife was held for questioning and later released. Six other people believed to be linked to him have also been detained.

The attacker's father, who lives in Msaken, eastern Tunisia, said his son had suffered from depression and had “no links” to religion.

While some who knew him said he was unreligious, other witnesses said he had recently shown outward signs of becoming more religious.

He appeared to have been radicalised very quickly, French authorities say.

Read more about the assailant here

The probe is being handled by anti-terrorism investigators.

The attack comes with France under a state of emergency following the Islamic State attacks in Paris in November that left 130 people dead.

Hollande announced that the state of emergency — which he had said only the day before would end on July 26th — will be extended by three months. Army reservists will be called up to boost security.

He also said France would strengthen its role in Iraq and Syria, where it is part of the international coalition fighting Isis jihadists.

France later called on young “patriots” between 17 and 30 to join the reserves.

On Monday, Interior Minister Bernard Cazeneuve said that France was not convinced about the potential Isis links.
“We cannot exclude that an unbalanced and very violent individual” has been “through a rapid radicalisation, committed to this absolutely despicable crime,” he said.

Eighty-four people were killed, including 10 children and adolescents, and around 300 sought treatment at hospitals.

Eighteen people, including one child, are still fighting for their lives in hospital, the health ministry said.

Hollande said “many foreigners and young children” were among those killed or injured.