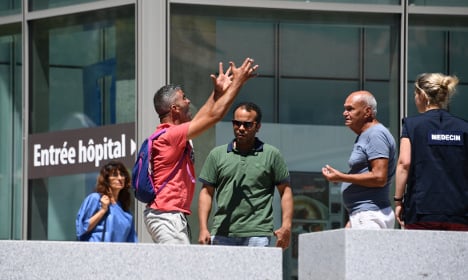 Tahar Mejri, who lost his wife and son during the deadly Nice attack that left 84 dead on Bastille day. Photo: AFP

“I have called everywhere, police stations, hospitals, Facebook and I can't find my son. I have been looking for him for 48 hours,” he tells AFP.

Mejri is one of hundreds whose life changed in an instant when a truck careered into a crowd of people who had just enjoyed a Bastille Day fireworks display in Nice on Thursday.

A few hours later his search came to an end at the Pasteur Hospital in the north of the city where he learned that his son was dead.

Earlier he told AFP he could not understand why the famed Promenade des Anglais was not closed to traffic for the celebration.

It was, but 31-year-old Tunisian Mohamed Lahouaiej-Bouhlel smashed through onto the pavement in the truck, leaving police helpless to stop him from killing 84 and injuring around 200.

“Everyone was there, old people, babies,” Mejri raged.

Abandoned dolls and pushchairs were among the debris left along the promenade after the driver was shot dead by police.

Ten children and teenagers were among the dead and another five children were still fighting for their lives alongside dozens of critically injured adults.

Thirty children were hospitalised at the Lenval Foundation paediatric hospital where a unit of psychologists has been working alongside doctors to deal with the flood of trauma.

“There were a lot of head injuries and fractures,” said hospital spokeswoman Stephanie Simpson.

Two of the children admitted to the hospital died shortly after the attack.

Also in the hospital was an eight-year-old boy who had yet to be identified.

Romanian authorities said three of their citizens were missing, and one of them might be the boy at Lenval.

“We are used to receiving a lot of children at the same time, but this, has been hard to manage. It is the psychological aspect,” said Simpson.

She says the hospital received a deluge of calls looking for missing children after the attack.

Trauma counsellors have been made available at several points around the city, and at Lenval, families dropped in sporadically.

One man accompanied his 13-year-old daughter and ex-wife who had been to see the fireworks display and got caught up in the chaos after the attack.

“It's the first time they have left the house since,” he told AFP, on condition of anonymity.

“They saw people running in all directions shouting that there were gunmen in the town. My daughter can't even speak, her mother had to convince her to come.”

Another man comes in with his wife and two daughters.

“We need to see someone. We saw everything on Thursday night, the truck passed 30 metres (100 feet) from us. Another four seconds and we would have been hit. Luckily we moved aside.”