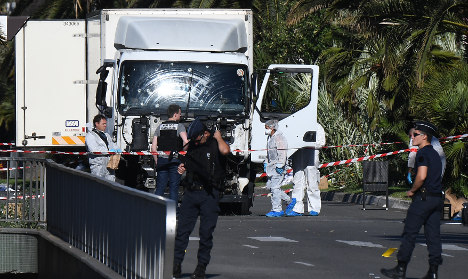 The Islamic State (Isis) group claimed responsibility for the truck attack that killed 84 people in Nice on France's national holiday, a news service affiliated with the jihadists said Saturday.

Amaq quoted an Isis security source as saying one of its “soldiers” carried out Thursday's carnage “in response to calls to target nations of coalition states that are fighting (Isis)”.

A statement from Isis's official radio bulletin Al-Bayan said the attacker had carried out a “new, special operation using a truck”.

Al-Bayan warned that Western countries “will not be spared from the blows of the mujahideen” no matter how much they increase their security measures.

For several years, extremist groups such as Isis and Al-Qaeda have exhorted followers to strike “infidels” — singling out France on several occasions — using whatever means they have to hand.

While some attacks on the West — such as the November assault on Paris and the March bombings in Brussels — were carried out by jihadists who have been to the centre of IS operations in Iraq and Syria, others have been led by so-called “lone-wolf” attackers.

Lahouaiej-Bouhlel's father said he had suffered from depression and had “no links” to religion.

“From 2002 to 2004, he had problems that caused a nervous breakdown. He would become angry and he shouted… he would break anything he saw in front of him,” Mohamed Mondher Lahouaiej-Bouhlel said in Tunisia.

Neighbours described the attacker, who worked as a delivery man, as a loner who never responded to their greetings.

He and his wife had three children, but she had demanded a divorce after a “violent argument”, one neighbour said.

Meanwhile, according to legal sources, four men believed to be linked to the Tunisian man who killed 84 people when he drove a truck into a Bastille Day crowd in Nice were arrested overnight Saturday, a judicial source said.

One of the men being held was arrested Friday and three others on Saturday morning, the source added. The driver's estranged wife is also still being held by police.

Mohamed Lahouaiej-Bouhlel, 31, rammed a 19-tonne truck into a large crowd as July 14th fireworks were ending in the French Riviera city.

At least 10 children were among the dead and 50 more were wounded, some of them “hanging between life and death”, a hospital official said.

French President Francois Hollande said in the wake of the Nice attack that France would strengthen its role in Iraq and Syria, where it is part of a US-led coalition fighting the jihadists.