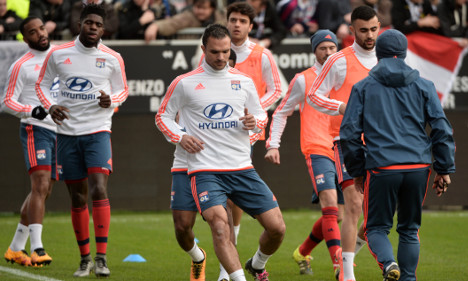 Lyon warming up before a French league game earlier this year. Photo: AFP

Lyon arrived Friday for a match scheduled for Saturday night and even enjoyed a light training session late in the evening at Fenerbahce's stadium in Istanbul.

But they were soon holed up in their Marriott Asia Hotel, a good 20km away from the main violence, as hundreds died in a military uprising.

“The players are in no danger at all,” club president Jean Michel Aulas said via Twitter early Saturday while the club also tweeted a photo of the team arriving at the airport.

“The players have been resting peacefully in their hotel rooms and after lunch they set off for the airport for a flight at 1600 local time,” Lyon said on their official website.

Turkish authorities said they had regained control of the country after thwarting an attempt by discontented soldiers to seize power from President Recep Tayyip Erdogan that claimed more than 250 lives.