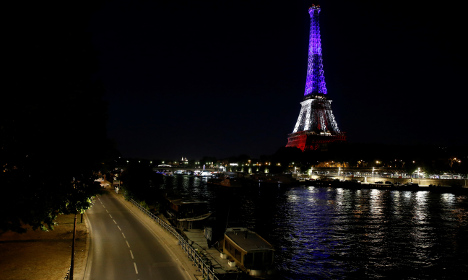 The Eiffel Tower illuminated with the colours of the French National flag in tribute for the victims of the deadly Bastille Day attack in Nice. Photo: AFP

Meanwhile, according to legal sources, five men believed to be linked to the Tunisian man who killed 84 people when he drove a truck into a Bastille Day crowd in Nice were arrested overnight Saturday, a judicial source said.

Two of the men being held were arrested Friday and three others on Saturday morning, the source added. The driver's estranged wife is also still being held by police.

President Francois Hollande said the country would observe three days of mourning as he warned the death toll could rise further, with more than 50 people fighting for their lives following the attack in the Cote d’Azur resort city on Thursday night.

Anti-terrorism prosecutor Francois Molins said the 31-year-old Tunisian was “completely unknown” to the intelligence services but that the assault was “exactly in line with” calls from militant groups to kill.

The attack left a scene of carnage on Nice’s picturesque Promenade des Anglais, with mangled bodies strewn over the palm-fringed walkway. At least 10 children and teenagers were among the dead.

“It was hurtling towards us and we had just enough time to yell at each other ‘get out of the way!’,” he said.

Dramatic video footage showed police surrounding the heavily damaged truck and firing through the windscreen to kill the attacker.

The massacre again prompted questions as to why France is a persistent target for attacks and what can be done to prevent such unsophisticated assaults.

Investigators were building up a picture of Lahouaiej-Bouhlel; a man with a record of petty crime, but no known connection to terrorist groups.

His father said he had suffered from depression and had “no links” to religion.

“From 2002 to 2004, he had problems that caused a nervous breakdown. He would become angry and he shouted… he would break anything he saw in front of him,” Mohamed Mondher Lahouaiej-Bouhlel said outside his home in Msaken, eastern Tunisia.

“We are also shocked,” he said, adding that he had not seen his son since he left for France but was not entirely sure when this was.

Neighbours described the attacker, who lived in a modest district of Nice and worked as a delivery man, as a loner who never responded to their greetings.

He and his wife had three children, but she had demanded a divorce after a “violent argument”, one neighbour said.

His wife was arrested on Friday and taken for questioning, a police source said.

The prosecutor said Lahouaiej-Bouhlel had been armed and at the end of his rampage he had fired “several times at three police officers” before he was shot dead.

Photographs after the carnage showed the truck, which had been hired on Monday, with its front badly damaged and riddled with bullet holes.

Molins said a fake pistol, fake rifles and a dummy grenade were found inside.

Hollande described the incident as a “terrorist attack” in a sombre televised address, adding that “France was struck on its national day… the symbol of freedom”.

But political opponents were already pointing the finger, with presidential contender Alain Juppe saying the carnage could have been avoided if “all measures” had been taken.

Some 200 people were injured in the assault, among them around 50 children, with some “hanging between life and death”, a hospital official said.

“There are French among the victims and also many foreigners from every continent and many children, young children,” Hollande said after visiting a hospital.

Two US citizens, a Russian woman, a Ukrainian, two Swiss nationals and three Germans were among those killed.

In a Facebook video, witness Tarubi Wahid Mosta recounted the horror of the attack’s aftermath.

“I almost stepped on a corpse, it was horrible. It looked like a battlefield,” Mosta said.

World leaders rushed to condemn the bloodshed, with US President Barack Obama blasting it as a “tragic and appalling” attack on freedom.

While no organisation has claimed responsibility and Islamic State group publications issued on Friday made no reference to the attack, Hollande said France would “step up” military action against IS targets in Syria and Iraq.

“We will continue striking those who attack us on our own soil,” he said.

IS has repeatedly singled out France as a prime target for its military action against the group in Iraq and Syria, and hundreds of militants have left France to fight in its ranks.