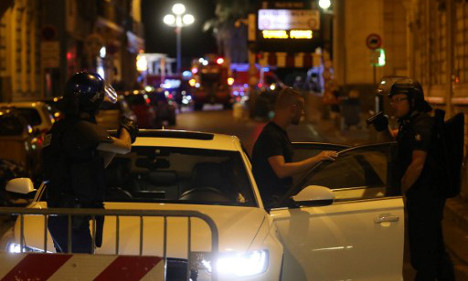 Photo: AFP
What happened?
Prosecutors confirmed that at least 84 people were killed when the large white truck ploughed through a crowd watching Bastille Day fireworks in the southern city of Nice at around 11pm on Thursday night. The display had just ended when the attack happened.
As well as the 84 dead, a death toll which may yet rise further, many more were left injured including 10 whose condition was described as critical.
Nice prosecutor Jean-Michel Pretre said the huge death toll was down to the fact the truck drove for two kilometres through packed crowds, gathered on the Promenade des Anglais.
Witnesses said there was no doubt the driver was deliberately mowing people down, while some witnesses said the truck swerved left then right as it it zigzagged to hit as many panicked victims as possible.
Authorities now say the driver was shooting at people with a pistol as he drove along.
Graphic footage from the scene showed bloodied bodies lying dead on the road. The bodies of the dead and injured lay for hundreds of metres along the famous promenade.
Apparently the carnage only came to an end when the driver was shot dead by police. Several police officers are reported to be among the victims.
Images show a large truck, with what appear to be bullet holes in the window, in the middle of the road, cordoned off by police.

The president of the local region Christian Estrosi told BFM TV that the truck was full of firearms and grenades. He later described them as “heavy weapons”. However by Friday morning it had emerged these weapons were fake.
France's specialist anti-terror investigators have taken over the investigation, prosecutors said late on Thursday night.
Who is responsible?
No group has claimed responsibility for the apparent attack as yet and the identity of the driver has not yet been released.
However in the early hours of Friday morning, AFP quoted a police source saying papers had been found in the truck that belonged to a French Tunisian national. He was said to be a resident of Nice and had hired a truck earlier this week.
It remains unclear how many people were in the truck, with prosecutors saying they were hunting possible accomplices.
Unconfirmed reports say someone was seen jumping out of the truck and running away.
“Investigations are currently underway to establish if the individual acted alone or if he had accomplices who might have fled,” said the interior ministry spokesman Pierre-Henry Brandet.
Are we talking about a terrorist attack?
Initially it was described by a local official who had been speaking to the press as a “criminal act”, but the nature of the attack left most believing it was the latest terror attack on French soil.
The fact that counter-terrorist investigators in Paris were put in charge of the probe shows that's exactly what French authorities think too. On Friday President François Hollande said the attack was without doubt of a “terrorist nature”.
France has been living under the threat of more terror attacks ever since gunmen and suicide bombers killed 130 in Paris in November.
Terror group Isis, which claimed responsibility for the massacre, has regularly called on its follows to use any means possible to attack French people, including driving vehicles into crowds.
In December 2014 a man drove his car into a crowd of people in the city of Dijon, shouting Allahu Akbar (God is greatest). The 40-year-old had a long history of mental illness and was found to have had no ties to jihadist groups.
Will France extend its state of emergency again?
The state of emergency is due to end on July 26th, but the president and his government may decide to extend it once again.
However given that critics have blasted it for being ineffective and counter-productive and the fact it failed to prevent Thursday's attack, the president could yet stick to the plan to end it.
Why today?
Thursday marked Bastille Day, France's National Day, which traditionally sees crowds across the country flocking to vantage points to see the evening's fireworks.

The same was happening in Nice at the time the truck ploughed into the crowd, with thousands crowded along the famous Promenade des Anglais on the seaside.
What is the reaction from authorities?

The former mayor of Nice Christian Estrosi and the current president of the region took to Twitter soon after the apparent attack and urged residents to stay indoors. That call was echoed by local authorities.

The President of France François Hollande returned to Paris from a private visit in Avignon southern France immediately for crisis talks.

US President Barack Obama and British PM Theresa May have also been briefed.
Armed police and soldiers flooded the streets of Nice in case of any further attacks.