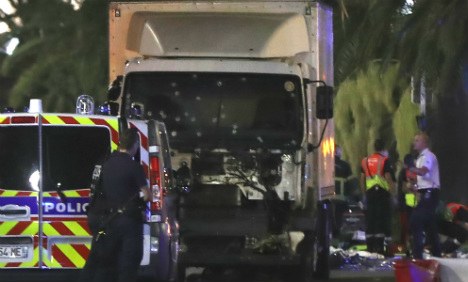 French authorities have not yet released the name of the man killed by police after ploughing his truck through crowds for 2km along the famous Promenade des Anglais in Nice.

However an identity card was found in the cabin of the large white truck and the French media reported that it belonged to a Franco-Tunisian man, aged 31, who was born in 1985.

However specialist prosecutor later confirmed that  he was only on Tunisian origin.

Other clues to his identity were also said to have been found in the truck including a driver's license and a bank card.

Police sources have told French media on Friday that the suspect had been formally identified and it was indeed the man named on the identity card. He has been officially named him as Mohamed Lahouaiej Bouhlel, who worked as a delivery driver.

Police raids were said to be taking place at his home in Nice and other locations. Unconfirmed reports on BFM TV said the suspect was married and had three children. He ex-wife was taken in for questioning on Friday.

AFP reporters interviewed many of the man's neighbours who described him as a loner with no visible religious affiliation.

They portrayed him as a solitary figure who rarely spoke not even to exchange greetings  when their paths crossed.

According to reports the man was known to police for violence and weapons offences, but was not on the radar of intelligence services for any terrorist or jihadist activities.
He was reportedly arrested recently for a fight during a traffic dispute. He was found to have been armed with a pistol.
It is believed Lahouaiej-Bouhlel the driver hired the truck he used in the attack several days ago in the town of Saint-Laurent-du-Var and began his journey down to Nice from the hills outside the town.
Former mayor Christian Estrosi said the man can be seen on CCTV images cycling up to the lorry before leaving the bike and climbing behind the wheel of the truck.
In his possession was a 7.65 calibre pistol, which he had used to fire on the crowd as he drove along the packed promenade zigzagging from side to side to hit as many victims as possible.
Questions have been asked how he managed to get access to the promenade des Anglais, with some reports saying he told police he was delivering ice cream in order to get passed the security barriers.
Other reports in the French media say the driver smashed through the barriers that had been placed across the promenade to close it off to traffic.
Initial reports that the truck was full of heavy weapons proved to be inaccurate as the weapons, including grenades later turned out to be fake.
Specialist anti-terrorist investigators are also trying to work out if he acted alone and also whether it was indeed a terrorist attack.
If they confirm it was terrorism rather than the work of a mad man, investigators will also be trying to work out whether he acted of his own accord or the attack was ordered by a jihadist network like Isis.
Estrosi, said he wants investigators to find those who helped the suspect carry out the attack.
“Attacks aren't prepared alone. Attacks are prepared with accomplices,” Estrosi said. “There is a chain of complicity. I expect it to be unveiled, discovered and kept up to date.”
France has long feared that danger of individuals acting alone and Isis have specifically asked its followers to use any weapon possible to attack French people, including vehicles.
If these potential lone-wolves are not on the radar of French intelligence services then it is almost impossible to know when they are going to act.
“If he was not under surveillance then it is almost impossible to predict these kind of acts,” a police union representative Luc Poignant told Le Parisien.