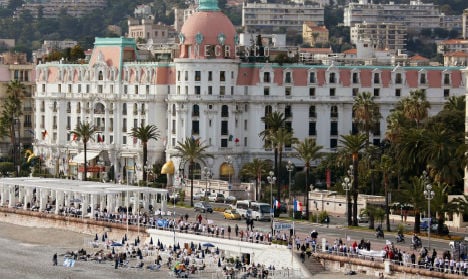 And the Promenade des Anglais in particular is the most iconic location in the city; it is the symbol of Nice, the image shown on most postcards of the city.

It has hosted motor racing, the Tour de France, and thousands of celebrity strollers over the years, but it will now be forever associated with the carnage of July 14th 2016.

Any visitor to the Riviera will have almost certainly walked some part of the stretch, where 84 victims were killed over a stretch of 2km on Thursday night.

The famous coastal road and walkway was first built in 1820, and the project was organized largely by the influx of English people who had begun spending their winters in Nice, attracted by the warmer weather. Financed by an English Minister, Lewis Way, the path is called the Promenade des Anglais, but it is usually shortened to 'La Prom'.

On a typical day, the 7km stretch that runs from the airport toe the Quai des Etats Unis, is full of joggers, cyclists, skate-boarders and tourists taking in the views over the Bay of Angels. It is also the centrepoint of several major events in the city's calendar, such as the Nice Carnival (the third largest in the world). Lined with palm trees, as well as its iconic blue beach-chairs perfect for people-watching, the Promenade sweeps along the coastline, leading from the city's port to its airport. Just last year, France submitted the pathway for Unesco World Heritage status.

The grand buildings along the promenade have also become landmarks, including the Hotel Negresco – which became a makeshift hospital on Thursday night, where emergency medical assistance was offered to the wounded.

France has been targeted before, with three major terrorist attacks in the last 18 months. November's co-ordinated attacks on the Bataclan concert hall, Stade de France and restaurant terraces were seen as an attack on young Parisians and their carefree way of living.

By attacking such a popular and iconic location on the national Bastille Day holiday, the attacker was targeting the essence of Riviera life and culture as well as a hugely popular tourist resort.

READ MORE: Attack on Nice is another blow to French tourism