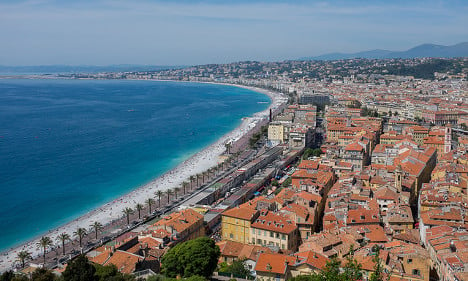 Photo: Kristoffer Trolle/Flickr
A gunman drove a 19-tonne truck into a crowd of revellers following Bastille Day fireworks Thursday evening, killing at least 84 people — in what President Francois Hollande declared a “terrorist” attack.
The place of the attack was a top tourist destination: the palm-lined Promenade des Anglais along the Mediterranean coast in the city which is the number two destination in France behind Paris.
The attack was the third major strike against France in less than 18 months. It comes eight months after Islamic State gunmen and suicide bombers attacked bars, restaurants, a concert hall and the national stadium in Paris, killing 130 people. In January last year 17 were killed in another attack at various sites including the offices of the Charlie Hebdo magazine and a Jewish supermarket in Paris.
Georges Panayotis, head of the MKG hotel and tourism consultancy, expressed concern about the effect the repeated attacks were having on the industry.
“This is no longer a classic terrorism situation where a couple of months is enough following an attack for economic activity to recover,” said Panayotis.
The successive attacks and high number of victims “will dissuade tourists for a certain time”.
The French government had just held this week its first meeting of a special government-industry committee headed by Foreign Minister Jean-Marc Ayrault to try to find ways to help the sector recover.
The number of tourists arriving on regular flights has fallen by 5.8 percent since January, including by 11 percent in Paris.
The number of hotel nights foreigners spend in Paris is expected to be down around 20 percent for the prime summer season, tourism minister Matthias Fekl said in a recent interview with TourMag.
The tourism industry is critically important for France, the world's top tourism destination that welcomed nearly 84.5 million visitors last year. The sector accounts for 7 percent of the economy and directly and indirectly employs two million people.
Travel sector shares took a beating on Friday, including shares in hotel group AccorHotels and Europcar rental agency, which both fell around 4 percent in a Paris market down around 0.8 percent overall.
The attack on Nice may nip in the bud an increase in tourists to destinations outside Paris, which was partially supported by France's successful hosting of the Euro 2016 football championships in June and July.
Tourist arrivals by plane outside of Paris were up by 11 percent in the first 10 days of July, thanks in part to a jump in last minute travellers from a number of European nations.
“We've had a flood of cancellations since last night,” said Denis Cippoloni, head of the hotel association in Nice.
“I went near the Promenade des Anglais this morning,” he told AFP. “Usually it is lively and animated, but silence reigned.”