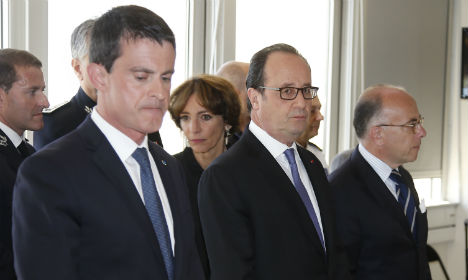 With forensics teams scouring the 2km stretch of the Promenade des Anglais where 84 people were mowed down on Thursday night, questions are naturally being asked asked about how such a “monstrous” act could have happened. The area where the attack took place, seen on Friday. Photo: AFP

Could the suspect and his truck have been stopped?
As has been proven in previous jihadist attacks carried out by individuals either not known to intelligence services or not being watched at the time, it seems almost impossible to know when and where they will decide to strike.
If the reports are correct then the suspect in the Nice attack – a 31-year-old Tunisian man named Mohamed Lahouaiej Bouhlel – was known for having a criminal record but not for having any radical Islamist tendencies or desire to wage jihad.
“We are waiting for the confirmation of the driver's identity but if it is the person whose name has been circulated then they are completely unknown to the internal intelligence services (DGSI),” said Luc Poignant from police union SGP-FO.
“It was not someone they had under surveillance, so it's extremely complicated, almost impossible to predict these kinds of acts,” said Poignant.
In reality authorities can only hope that the acts either go wrong or are thwarted.
Jihadist individuals who have tried to carry out attacks in the past, such as the gunman on the Amsterdam to Paris train in August last year or the student who tried to shoot churchgoers near Paris in 2015, were thwarted either by brave bystanders or by their own mistakes.
But how was the truck able to get to the Promenade des Anglais?
As far as we know the suspect hired the lorry in the days before the attack with the sole purpose of trying to kill as many people as possible.
The heavy goods vehicle was apparently chosen for the very reason that it is hard to bring to a stop and anyone in its path will not stand a chance. A body is removed from the promenade. Photo: AFP
How her got passed security check points is not exactly clear.
Some reports say the driver crashed through security barriers that had closed off the road to traffic and then drove down the promenade for 2km, claiming victims every few metres.
However reports in French TV channel M6 on Friday said  the driver had managed to get passed police by lying to them saying he was delivering ice cream.
Whatever emerges as the real reason questions will no doubt be asked about whether temporary security barriers are sturdy enough and whether security could have been tighter
Because once the truck is through the gates there's little anyone can do.
Videos posted on Twitter show what appears to be officers shooting at the cabin of the truck as it drives past. Other reports talk of someone heroically trying to jump into the driver's cabin while others ran behind the truck.
His rampage was only ended when he was shot by police.
One MP on Friday Henry Guaino said soldiers with rocket launchers could have stopped the truck.
Was security tight enough for such a high profile event?
Questions are naturally being asked about whether security was reinforced enough for an event that authorities clearly feared could be targeted.
France's national day on July 14th, or fête nationale as it is called, has long been considered a target for terrorists intent on wreaking bloodshed in France.
As a result security was stepped up at events across the country, including in Nice.
“Questions need to be asked such as how many national police were on duty to secure the event,” said former Nice mayor Christian Estrosi.
But police unions reject the idea there were not enough officers on duty.
Union leader Luc Poignant said the level of security was around the same as for the fan zone during Euro 2016.
National police bolstered the local police and the road has been closed off to vehicles.
But as we know the barricades were not enough to stop a heavy goods vehicle whose driver was intent on causing death. Photo: AFP
Could France have predicted this type of attack?
Many of the questions following November attacks in Paris focused on the weapons and the bombs. But in this case the weapon wasn't illegal arms or a sophisticated bomb vest. It was a truck, hired out just two days before the attack.
Earlier this week it emerged the head of French internal security Patrick Calvar had told a French parliamentary inquiry into the Paris attacks that he feared Isis would change tactics and use “car bombs and explosives” as weapons to take more French lives.
While that was not the case on Thursday night, and although it remains unknown if the suspect was even attacking on orders from Isis, there have been similar incidents in the past.
In 2014 a man drove his car into a crowd in the town of Dijon, shouting Allahu Akbar. Although it later turned out he had a long history of mental illness his act came after Isis had urged its followers to use any means necessary, including vehicles to kill.
In a 2015 a man beheaded his boss in central France before driving his van into a gas cannister factory in the hope of causing an explosion. Although he failed, it was another clue that jihadists were prepared to use any modus operandi if they could not get their hands on guns.
But even if they could have predicted it, it's another thing being able to stop it because of the many crowds in any city in France on any given day.
How will France react?
The attack comes just as France had breathed a sigh of relief that the Euro 2016 football tournament had not been hit by an attack. The public were beginning to look forward to the summer.
The president has already said that actions will be stepped up in Syria and Iraq, where the country's air force has been launching bombing raids on Isis-run areas since November.
Hollande also said reservists will be called up to boost security so we can expect to see an even greater security presence on the streets of towns in France.
He also extended the state of emergency for another three months, which means more house arrests and home searches as police hunt for potential suspects. The state of emergency has been criticised by many for being ineffective and even counter-productive.
The head of state warned of more attacks.
“We know we have not yet finished with terrorism,” said Hollande. “What is need is sang-froid and lucidity on the part of those who must take decisions.”
One worrying result of the attacks will likely be a rise in Islamophobic incidents, as was seen after the November terror attacks in Paris and the Charlie Hebdo killings.
Hollande urged the population not to cede to “hate or anger”.
France's Prime Minister has also called for unity and for the French to wise up to the fact that this kind of threat is here to stay.
“Times have changed, and France is going to have to live with terrorism, and we must face this together and show our collective sang-froid,” he said.
France is a great country and a great democracy and we will not allow ourselves to be destabilised,” he added.
“We want to bring the French nation together. The only dignified response (to the attack) is for France to stick with the spirit of July 14th, a France that is united around its values,” he said.