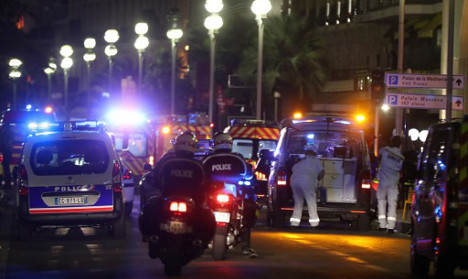 Officials in the French Riviera city of Nice say at least 84 people are dead after a truck rammed into a crowd on Thursday night.

In the amateur Youtube video below, people panic as the truck drives through the crowd nearby.

Shocking images, many of which are too distressing to show, revealed the carnage and the trail of destruction the truck driver left behind.

Picture from Nice, France, moments ago (a witness there sent me) – a truck driver appears to have run over people: pic.twitter.com/kNExFeiDdF Local newspaper Nice Matin posted an image on Twitter apparently showing the white truck that ploughed through the crowd. Its windscreen was riddled with bullet holes.

Videos and photos on social media show people running down the streets of Nice following the incident.

Police carry out checks in the city centre of Nice. Photo: AFP A helicopter flies near the scene in Nice. Photo: AFP The Paster Hospital is taking in victims.