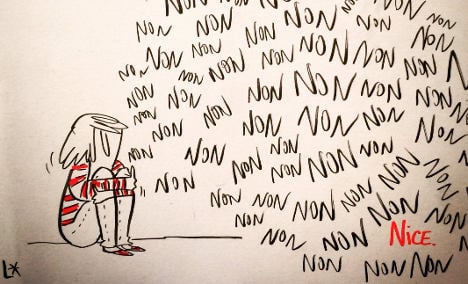 The Riviera city has been left in shock after at least 84 people were killed in a truck rampage Thursday night. Victims included at least ten children, and people of several different nationalities. Click here for more of what we know of the victims.

Images and drawings are pouring out on social media in tribute to the victims and in support of the people of Nice – and of France.

On Twitter, hashtags such as #LiberteEgaliteFraternite, #NousSommesUnis (We Are United), and #PrayforPeace are all trending in France.

We are sending our love & courage to the victims' families, friends & to all the people of #Nice. Paris is with you. pic.twitter.com/9MWEUKxBbd

I share my love, my peace and my hugs to the world.#BeNice pic.twitter.com/HbOLYOHEuI

” Imagine all the people
Living life in peace… ” #PrayForNice pic.twitter.com/uoULUx7FFc

Agony for France and for us all. #Nice pic.twitter.com/yvL3WTKwAF

Cities around the world, including New York, Dallas, and Montreal, are showing solidarity by lighting up their monuments in the colors of France.

The Mexican Independence Angel monument is illuminated with the colors of the French national flag in Mexico City. Photo: AFP