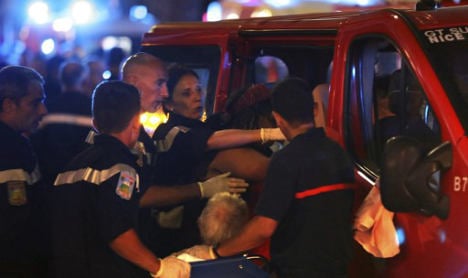 French President Francois Hollande said Friday that “many foreigners and young children” were among those killed or injured after the truck attack on a crowd celebrating Bastille Day in Nice, with around 50 fighting for their lives.

“There are French among the victims and also many foreigners from every continent and many children, young children,” said a clearly moved Hollande in a speech from a hospital in the French Riviera city.

“As I speak 84 people are dead, and around 50 are in a critical condition between life and death,” he added.

A total of 188 people were hospitalized due to injuries in the attacks, according to the Ministry of Health press release shown in the Tweet above. “Forty-eight of them are in a critical condition, of whom 25 are in intensive care,” the statement says. The French prosecutor gave slightly different figures in a statement at 5pm, saying 202 were injured, 52 critically.

Hollande visited a hospital in Nice where medics were battling to save lives and prevent the death toll from rising further.

He praised the swift efforts of the emergency services in response to the attack. “Emergency staff came in the middle of the night to intervene to save lives,” he said. “They did everything they could to save lives. Their dedication was exemplary.”

He also paid tribute to those who will have to deal with the psychological trauma of experiencing the attacks, whether or not they were physically wounded.

Above, Hollande and other ministers are seen visiting a Nice hospital.

“We have visited scores of injured, who have horrendous images in their heads. They are suffering more because of the psychological trauma,” said Hollande. “Even people who have no signs of physical injury will carry throughout their lives the trauma of the horrific images they saw.”

The injured come from all walks of life and many different countries; so far it has been confirmed that, as well as French nationals, British, German, Russian, Swiss and Ukrainian citizens were hurt in the attack.