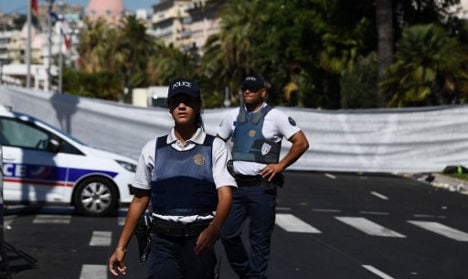 On Friday, instead of waking up with the usual post-Bastille Day hangover,  the Riviera city has instead opened its eyes to be greeted by shock and mourning.

The Promenade des Anglais would usually be filled with locals and holidaymakers on a warm July day; today it has been cordoned off by police as officers remove bodies from the scene, and luxurious hotels have become makeshift hospitals. Many of the bars and cafes that line the seafront are closed. Flags are flying at half-mast. Long after dawn broke some of the victims were still lying on the promenade covered by blue and white sheets.

Laura Tobin, who lives near Nice, says her friends in the city are staying inside their homes. “Those who live outside Nice don't dare go in,” she told The Local. “The Entire French Riviera is in stand still. Traffic is horrendous, the Promenade des Angles is completely blocked. Monaco is checking any car that drives in, creating a huge traffic jam.”

“The people that are around and about in Nice are mainly journalists reporting,” she said. The large media presence means many broadcasters are experiencing reduced bandwidth and delays in their broadcasting.

Meanwhile, local resident Neil Sandell said in a Facebook post that it was impossible to describe the mood of the city. He emphasized the “dissonance” between last night's carnage and the quiet of Friday morning.

“The Prom is more than a traffic artery. It is the city’s social hub,” said Sandell, describing the diversity of the port city. “Today it is vacant.”

A Swedish citizen on holiday in Nice, Kristian Julius, told The Local: “Today everything is quiet. There’s hardly a soul on the beach. The shock is starting to wear off – we’re just trying to carry on as normal.”

Julius ran to the beach to escape the truck last night after seeing it veering into the crowd, and remembers scenes of panic breaking out there. “We saw two people who had been killed, and an old woman whose leg was torn off at the knee. It was the old people and children who couldn’t get away quickly enough who were hurt – it’s so cowardly,” he said.

On Friday there were reports of holidaymakers just packing up and heading to the airport or looking for any other way to get out of the city.

The city's mayor, Philippe Pradal, said that Nice was “in a state of infinite sadness”, speaking on RTL radio on Friday morning. “The city has never been hit so hard.” The local paper, Nice Matin, ran the headline 'Carnage in Nice' above a picture of the scene, and devoted nine pages of Friday's edition to the events of Thursday night. One of the paper's reporters, Damien Allemand, had been at the fireworks display and gave a horrifying testimony of “bodies flying like bowling pins”.


Police are guarding the Promenade while bodies are removed, and forensics experts and police officers are examining the white truck which was used in the attack. While some locals and tourists are watching the emergency services at work, others walk straight past, heading to the beach. The grand, 5-star Hotel Negresco has had its lobby transformed into a first-aid point. Richard Werly, correspondent for Swiss newspaper Le Temps, said the lobby was packed with “hundreds of people in shock.” The Hi Club disco was also used as a makeshift hospital.

As well as the dead, hundreds of others were left injured by the 19-tonne truck, with 18 currently in intensive care.

The Centre Universitaire Méditerranéen, a conference centre which is part of the city's university, is being used as a meeting point for families of the victims and injured, with police protection. Anti-terrorist officers have opened an investigation into mass murder.

Upcoming cultural events in the resort town have been cancelled, including a jazz concert and a show by Rihanna.

“From tomorrow the city's flags will be fflown at half-mast. After the cancellation of Rihanna's concert, the jazz festival is also cancelled.”

Francois Hollande is expected to arrive in Nice at around midday, having declared three days of national mourning.

But the scars of Thursday's rampage will last for far longer in Nice and the rest of the French Riviera.

“This will not stop us living our lives,” said Jean, an astronomer who was caught up in the panic with his wife Myriam and his two children and their dog.

He said the dog had led them to safety, to a hotel where the manager told them to go into one of its rooms. With fears that other gunmen could be on the loose, Myriam told AFP that she locked the children in a shoe cupboard and they remained in the room for three hours before deciding that it was safe to leave.

But the family were back on the promenade on Friday “so the children would not be terrified”, Myriam added.