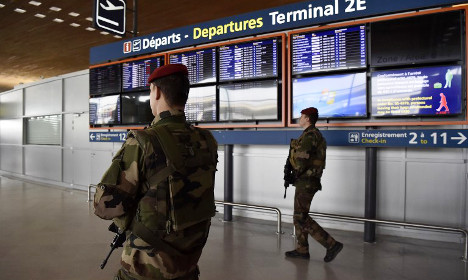 Photo: AFP
Will we notice the difference on a day to day basis?
Well for a start it won’t mean you will see fewer soldiers on the streets of French cities.
The troops are on the streets as part of Operation Sentinelle, which was launched in the aftermath of the Charlie Hebdo and Jewish Kosher store attacks in January 2015. The soldiers will be on duty until the operation is wound up.
In fact, the changes will most likely go by unnoticed for many in France. Here's a run down of what actually changes.
Release of those under house arrest
One of the biggest changes that comes with the end of the state of emergency is that the French police will lose some of their power.
Specifically, they will lose the power to hold people under house arrest whose behaviour is considered “a threat to security and public order”.
After the 26th, these people will no longer be allowed to be held without the order of a judge and will effectively go free.
No more raids without a warrant
Another of the big changes that came about since the state of emergency kicked in was the police getting special power to raid suspects' homes without permission from a judge.
Police could raid any home at any time of the day.
These permissions will be taken back from police from the 26th onwards, meaning officers will not only need a warrant from a judge, but they will also only be able to carry out such raids between the hours of 6am and 9pm.
Since November, police have carried out around 4,000 of these raids.
Back to normal for the right to protest
You'd be forgiven for thinking nothing had changed concerning the right to protest in France, not least considering the repeat demonstrations organized by the CGT unions in recent months over the labour reforms.
But, the state of emergency did actually call for a ban on protests. Some of these bans were carried out, especially during the COP21 climate summit in Paris over November and December.
And there was no demonstration after the November attacks like the one after the January attacks, which saw millions march in unity across France just days after the atrocities.
But from the 26th, French officials have no reason to ban a demonstration providing it's not deemed to risk a serious threat to public disorder.