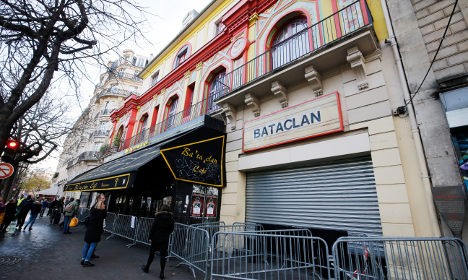 Chilling testimony from the first police officer to arrive at the scene of the Bataclan concert hall in Paris, where jihadists killed 90 people in November, was published on Tuesday.

This is his anonymous account of the massacre given to lawmakers probing the response to the attack:

“We (he and another officer) were struck by the fact that someone was filming with his cellphone. We told him to get out of there. We heard shooting.

“We looked at each other, I think I said: 'We need to go in'. He looked at me and that was enough to know we were on the same wavelength and that from then on, we were one.

“As soon as we began moving forward, the wooden doors of the Bataclan opened towards us, and between 15 and 30 people burst out, running in our direction and screaming.

“From the moment that we started to advance down the corridor, the shots stopped, and when we went in, there were none. It was silent.

“Then, it was an indescribable sight, you can imagine. Hundreds of bodies — to us they were all dead — were entangled on top of each other: in front of the bar, in the pit. Some piled a metre high.

“No one moved, there were no moans, no noise. There was a glacial silence.

“One of the terrorists, that we later identified as Samy Amimour … appeared on the stage. He faced us, his assault rifle in his hands, threatening a young man a few metres from him.

“I shot four times and my teammate shot twice. The individual groaned, slumped, and fell to the ground.

“We were about 25 metres away.

“In the seconds that followed there was an explosion, but it was high up. We didn't immediately understand that it was him who exploded.

“Then there was shooting and we took cover. We were sure we would not get out of that hell alive.”

'They were busy executing people'

“Then there was calm. There were only two of us, we didn't know where the terrorists were. So, I decided to go outside and see if back-up had arrived.

“Then shooting began inside again. This time it was really shot by shot. We understood they were busy executing people. We couldn't stay outside.

“So we returned inside (There were now about a dozen police officers). There was more shooting in our direction, and we did not really know where it was coming from. I shot back twice.

“Then the shooting stopped and it was calm.

“People still were not moving. We could tell that even those who were still alive were pretending to be dead.

“After a while there was no movement or shooting. I decided to go and get the victims who were in the pit a few metres from us. People started moving and making themselves heard.

“We put in place an evacuation system, with all the difficulties present: the ground was very slippery because there was blood and bullets everywhere.

“We were forced to climb over or move the dead. There were also those who we knew were very seriously injured, but we had to extract them anyhow,without using first aid.”

Two other attackers blew themselves up alongside Amimour during the emergency operation.

The attack on the Bataclan was one of several on Paris bars, restaurants and the Stade de France football stadium by gunmen and suicide bombers on thenight of November 13, 2015.