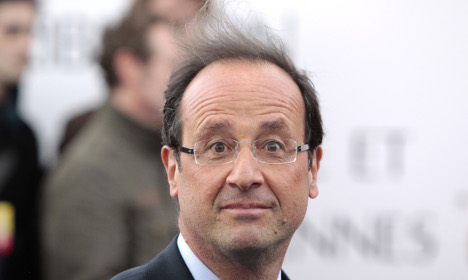 President François Hollande has been keen to cut costs since arriving at the Elysée Palace but he clearly values the service of his own personal hairdresser.

According to a report in Le Canard Enchaîné newspaper to be published Wednesday, the French presidency has been parting with €9,895 a month to look after the head of state's hair. And that’s not including “family benefits” and “residence allowances”.

The gross salary just, (well we say just) €5,000 a month less than what the president himself is paid to run the country. Although the president did cut his own salary by around 30 percent when he started in office.

“Everyone has their hair done, don't they?” said Le Foll, his trademark thick grey mane flopping over his forehead.

The Canard Enchaîné, known for its exclusives as well as its cutting satire, published a copy of the hairdresser’s five-year contract, which began in 2012, when Hollande was elected and will end before the next presidential election in April 2017.

Apparently the contract was made public during the legal case against Closer magazine, which in January 2014 revealed the president was having an affair with French actress Julie Gayet.

Over the course of five years of maintaining Hollande’s hair, the barber named as Olivier B will have pocketed a cool €590,000.

“Mr B. commits to maintaining the utmost secrecy, during and after the completion of his contract, on the work he has done and the information he has had access to,” the contract reads, according to Le Canard.

According to Le Canard the hairdresser regularly follows Hollande around on his travels.

To justify the hefty salary the barber’s lawyer Sarah Levy spoke of a heavy workload and huge personal sacrifices on behalf of her client.

“He is available to the president around the clock, 24 hours a day, and is never replaced by anyone else. He missed the birth of his own children, their broken arms, their operations…,” she said.

For their part the Elysée said the hairdresser “starts very early in the morning, and has a long working a day. He does the president’s hair every morning and as often as is necessary at each public speaking event,” said the Elysée Palace.

But as the photos below show Hollande has had a few bad hair days in his time in the Elysée, mostly it has to be said, because of the elements.

It doesn't matter how much you pay your barber, he can't control the weather. And naturally the story sparked Twitter into overdrive on Wednesday morning with #Coiffuregate becoming the top trend.

And the Twittersphere was not going to miss out on an opportunity to mock the president.

“For half of what the barber earns I would like to take charge of Hollande's hair,” said the tweeter below. Could a mullet improve his popularity ratings?

While another tweeted: “Budget cuts” with a mock-up picture of Hollande wearing a hat.

Some have suggested  the hair dresser should make hair while the sun shines because he might be out of a job if presidential candidate Alain Juppé is elected.