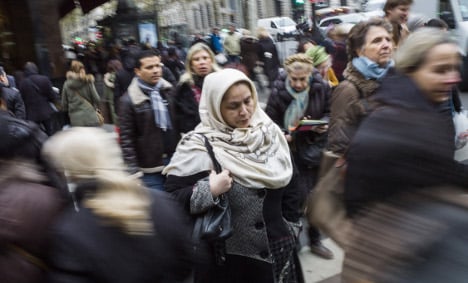 The woman, named Asma Bougnaoui, lost her job at IT consultancy Micopole SA in 2009 just 11 months after starting.

She had been asked by her bosses to stop wearing her Muslim veil claiming clients at the company she was working with felt uneasy by her choice of head wear.

But she refused and was forced out.

She complained to an employment tribunal which found in favour of her bosses, but after lodging an appeal her case has ended up before the European Court of Justice.

In a preliminary opinion Eleanor Sharpston, the advocate general at the European court, judged that a company policy that requires an employee to remove her hijab when in contact with clients constitutes “unlawful direct discrimination”.

Sharpston said the EU rules on discrimination does allow for strict rules on appearance if it is a “genuine and determining occupational requirement”, but that could not be applied in the case of an IT consultant.

She stated that if the woman had been wearing a full face veil, like the niqab or burqa then would have crossed the line because: “Western society regards visual or eye contact as being of fundamental importance in any relationship involving face-to-face communication.”

She concluded that businesses should put the interests of their employees before their own.

“It is not about losing one’s job in order to help the employer’s profit line,” Sharpston said.

Her opinion does not quite signal victory for Bougnaoui because it is not binding. The court will issue a final judgement on the case later this year, but preliminary rulings are normally followed.

The ECJ judgment will be binding on member states.

France famously banned the wearing of the hijab in schools and public buildings back in 2004, before introducing a ban on the full face veil in public places in 2010.

The issue of the wearing of Muslim headscarves regularly flares up in a country that has found it difficult to reconcile the growing presence of Islam with French culture.

There have been regular calls to extend the ban on Muslim headscarves and other religious symbols to the work place, while recently PM Manuel Valls said he would be in favour of universities also prohibiting the wearing of hijabs.