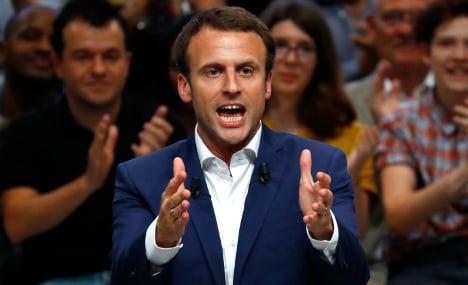 France's rising political star Emmanuel Macron dropped more strong hints of his presidential ambitions on Tuesday, saying he wanted to lead his new political movement “to 2017 and to victory”.

The 38-year-old economy minister set up “En marche” (On the move) in April to the consternation of many of his Socialist Party colleagues, who see it as a challenge to the authority of embattled President Francois Hollande.

While Macron stopped short of declaring himself a candidate for next year's presidential race, he told supporters at a meeting late Tuesday: “We will carry (the movement forward) together to 2017 and to victory”.

“From tonight, we have to be what we are, which is the movement of hope,” he told 3,000 supporters gathered in Paris in an address that bore a strong resemblance to a campaign speech.

In an apparent dig at Prime Minister Manuel Valls — who has expressed annoyance at Macron's initiative — he added that his vision for France has “upset” some because “it will upset the established order”.

“It's high time all this stopped,” Valls said earlier Tuesday in an exasperated aside to TV cameras. Valls has been particularly critical of Macron's new movement, which the economy minister has said is designed to promote “new ideas … neither of the right nor the left”.

“It will not be a movement to produce yet another presidential candidate, that is not my priority today,” he said in April.

Macron's allies say no one should expect him to announce yet that he is either leaving the government or that he will be a candidate for president.

“He is not going to say 'I'm leaving straight away'” but he is “entering campaign mode”, said Lyon mayor Gerard Collomb, a key supporter.

Some say he could launch his real campaign in September, France's traditional back-to-work month after the summer holidays.

Macron last weekend indicated his ambitions to stand in next May's election.

Invited to watch a stage of the Tour de France, he made a series of references comparing cycling with politics, saying he was in the race to challenge for the “yellow jersey” worn by the leader.

The problem for the Socialists is that while Macron refuses to rule out a bid for France's highest office, Hollande's abysmal poll ratings make it hard for him to appear the natural candidate of the left 10 months from now.

In an apparent jibe at Hollande, Macron said this month the possibility of primaries being held to decide the candidates of both the Socialists and the centre-right Republicans was “proof of the weak leadership on both sides”.

Hollande has said he will decide by the end of the year whether he will stand, even though opinion polls currently show he would be eliminated in the first round.