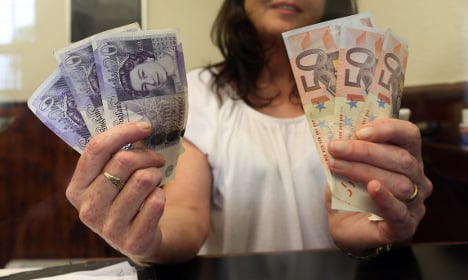 As feared the impact of the Brexit referendum continues to have a major knock-on effect on the lives of British expats who call France home.

While no one really knows what the future will hold in terms of their rights in France, given that negotiations to determine the post Brexit Europe are far from even beginning, the lives of expats have nevertheless been impacted by the referendum in a real way.

And this is thanks to the drop in the value of the pound.

This drop began in the weeks leading up to Brexit, but has been more dramatic in the weeks since. It now stands at a value of €1.17.

Many analysts believe it will continue to fall further however.

George White is about to move down to his holiday home in Provence but the drop in the pound has hit him hard.

“Now we are paying more for the building work, for the mortgage, and our house in the UK is worth less,” White said.

“We were planning to move to an “equal valued” house down there which would in theory have been a nice big place with land and a swimming pool. Now we are in limbo.”

Richard Thorneycroft depends on British clients at his holiday painting courses in Provence, but with visits to France becoming more costly for British holidaymakers due to the fall of the pound, he fears he may be put out of business.

“I have been devastated by the result and the effect on the pound which inevitably engenders a great deal of reticence for my UK-based customers who are less willing to part with their sterling in France,” said Thorneycroft.

“If something isn't done now, I risk losing out and I worry for the future of my family.”

Not all British expats in France have been hit hard by the fall in the pound, especially those who are heading home.

David Thompson is leaving Normandy for the UK, largely for health reasons, but due to the referendum impact it also appears to be the right time to move back from a financial point of view.

“It makes sense to move back and sell the French property,” said Thompson. “Unfortunately we bought it at the peak of property prices and they have slumped since, so we aren't even getting back the amount we spent to buy it, so the more pounds sterling we can get from the sale the better.

“Since the Brexit vote we feel we made the right decision to move back, there is too much uncertainty regarding the status of expats, plus the drop in the sterling exchange rate would have hurt us very badly while living in France as we were dependent upon my wife's partial pension from the UK to live on.”

The problem of course with selling up in France right now is trying to find a buyer. For many the best chance of selling their property is to find another British buyer, who has the same dream they had – to live in tranquil rural France far from the hustle and bustle of city life.

But buyers from Britain will clearly be having second thoughts now that fall in the value of the pound has meant a rise in the price of property in France.

Pat Reid, who is looking to sell her house in France said a newly retired British couple who were potential buyers pulled out the day after the referendum.

Her potential buyers were worried by whether their pension would allow them to live abroad. The British government also has the option of freezing them, which would mean an even greater loss of income.

John Collyer who lives near the town of Eymet in the Dordogne said he and his wife had lost 15 percent of the value of their pensions since the pound started falling in the run up to the referendum.

“We’ve stopped bringing any money over from our savings in the UK due to the exchange rate. It’s time to just baton down the hatches and live a little bit more meagerly than we have been doing,” said Collyer.