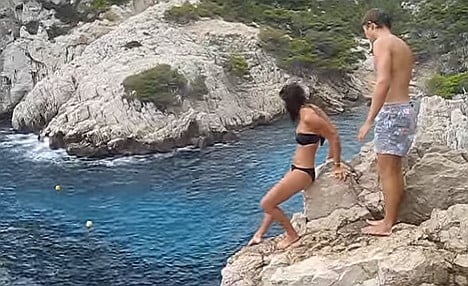 Cliff jumping from the Calanques, anyone? Photo: YouTube/Screengrab

A holiday in France does not mean you have to spend all your time reading on a beach, shuffling around a Chateaux or extending your waistline in a Paris bistro.

Here are ten extreme or crazy activities, depending on which way you look at life, that are definitely not for the faint–hearted.

1. Paragliding over the French Alps at Chamonix

Chamonix is dubbed the adventure capital of France and attracts adrenaline junkies from all over the world. For those who need more than skiing and snowboarding, why not go tandem paragliding from high up on the slopes of the Mont Blanc range.

The Marathon du Medoc is slightly different to other longer distance races in that the usual refreshments of water or energy drinks are replaced by local wines. If you like to combine running with a good tipple then this is for you.

3. Zoom down an Alpine slope in the Megavalanche

Forget the Tour de France — the really big cycling event of the year in France takes place high up in the French Alps and sees thousands of riders hurtling down the slopes at breakneck speeds.

It’s called the Megavalanche and involves 2,000 participants descending 3,000 metres through the mountains. Why not sign up for next year’s event?

The famous Belharra wave  – a deep water break that occurs a mile off the coast of the French Basque country is considered to be the biggest wave in Europe and is a legend in the world of surfing. Indeed big wave surfers fly in from all over the world to ride it. The 8- to 15-metre wave, which was once known to swallow ships whole, rarely breaks, but why not be there when it does?

If you like high speeds, the mountains and the cult film Cool Runnings then the bobsleigh ride at La Plagne is the one for you.

It was built for the 1992 Winter Olympics in Albertville and offers you the chance to experience an official Olympic competition standard bobsleigh run, including 19 bends over a 1,500-metre long course with a vertical drop of 125m. This is seriously scary stuff.

6. Cliff jumping from the Calanques

The stunning Calanques are limestone cliffs that plunge into the Mediterranean and connect Marseille to Cassis. Yes they can be walked, but they can also be jumped, at various points as this video below shows. You'll need a head for heights, a strong stomach and the ability to swim.

The Gorges du Verdon – France's answer to the Grand Canyon – is one of the most spectacular sites in France and it can also be one of the most thrilling, if you chose, that is, to descend through the canyon in a kayak. The video below says it all.

If you like water, crazy descents, jumping, ropes and spectacular scenery then you'll love canyoning, and there's no better place to do it, (so says plenty of blogs and canyoning websites) than Riolan, in the Alpes de Hautes Provence.

There's no shortage of places to a good view of Paris, but compare waiting in line for hours to reach to  the top of the Eiffel Tower to whizzing around the skies above the City of Light in a helicopter. It's a no-brainer. If you have the cash that is.

10. Parachute over the Arcachon Bay

No thrill-list would be complete without a parachute jump and we've opted for the spectacular (have we used that word already?) Arcachon Bay in the south west of France as the best place to land.