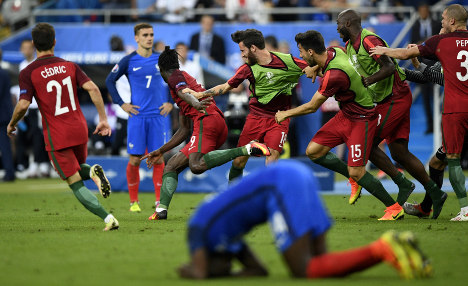 Portugal won the European championship in Paris on Sunday night after stunning the home nation by scoring the only goal in extra-time and despite star-man Cristiano Ronaldo being stretchered off in the first half.

Portugal's Eder struck the winner in the 109th minute after shrugging off two challenges and burying a low right foot shot from outside the box.

With 11 minutes of the extra period to play, the goal that Portugal's fans have waited their lives to see arrived as Eder held off Laurent Koscielny and drove a crisp shot into the bottom-left corner from 25 yards.

The goal came out of nothing and stunned a France side, which had dominated possession and seemed to be the only team interested in pushing for a winner.

Twelve years after losing 1-0 to Greece as hosts of Euro 2004, Portugal inflicted the same fate on France, who were seeking a cathartic victory eight months on from the Paris attacks that left 130 people dead.

France coach Didier Deschamps had hoped to lead his side to a fourth major tournament win, and third on home soil after Euro 1984 and the 1998 World Cup, when he was captain. But it was Ronaldo's Portugal who prevailed.

But things could all have been different for France.

The game seemed to be diminished by Ronaldo's premature exit and it took the 58th-minute introduction of Kingsley Coman in place of Payet to enliven France.

The Bayern Munich winger produced a glorious cross that Griezmann could only head over from six yards and then slipped a pass through to Olivier Giroud, whose shot was parried by Rui Patricio.

Rui Patricio also repelled a 25-yard shot from the marauding Sissoko and when France substitute Andre-Pierre Gignac neatly sidestepped the fit-again Pepe in stoppage time, he could only scuff his shot against the post.

But Portugal had created extra-time chances of their own and hit the bar with a late free kick before Eder's winner.

Ronaldo stretchered off in tears

Portugal overcame France despite the departure of their star man Cristiano Ronaldo who went off injured after 25 minutes.

The Real Madrid forward hurt his left leg in an eighth minute collision with French star Dimitri Payet. He attempted to play on with a heavily bandaged knee but finally gave up.

After one acceleration midway through the first half Ronaldo signalled to the bench that he could not carry on. The 31-year-old striker could not hide his despair as he was replaced by Ricardo Quaresma with the game stillgoalless.

Ronaldo cried tears of despair in the 2004 final when his country lost 1-0 at home to Greece. He had said before this final that he wanted to be “crying for joy” this time.

In the end he got his wish.

Before the game France had been gripped by final fever. The fanzone in Paris was declared full over two hours before kick off.

Bars in the capital were so packed that most had to settle from watching the action from the street.

The screams of anguish when Portugal scored were audible across the capital as well as towns and cities across the country.

But the capital's sizeable Portuguese population were determined to celebrate and took to the streets to celebrate.

Les Bleus had been desperate to lift the nation after a year marked by terror attacks and social strife. Although they fell at the final hurdle they succeeded in boosting a country and restoring pride in their national team.

Alors les bleus. It just wasn't meant to be.