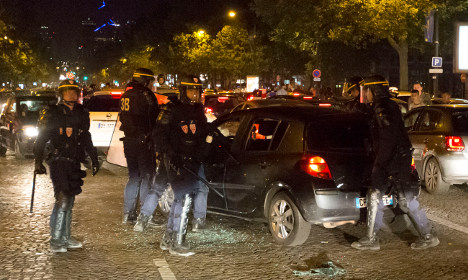 There were sporadic outbreaks of violence after the France Germany semi-final. Photo: AFP

The victim, aged around 60, was hit in the face with a cast iron table on the fringes of a fight in the eastern town of Belfort, and died of his injuries in hospital later.

The area’s deputy prosecutor Lionel Pascal told AFP the 21-year-old suspect was under investigation for involuntary killing and had admitted “throwing the table” on Thursday night.

He told prosecutors he had not seen the victim and had not intended to hit him, Pascal said.

A police source said the fight broke out over a trivial matter and had nothing to do with the football match, which France won 2-0.

Four other suspects are to be prosecuted for aggravated violence, Pascal said.