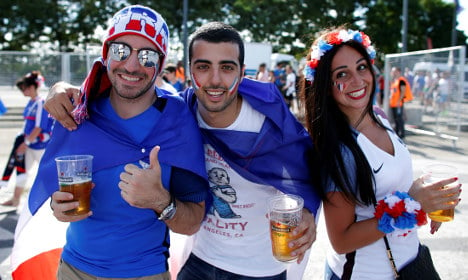 Tricolour flags fly from apartment blocks and bars, cafes and parks are packed for showings of Les Bleus matches on giants screens.

“The French people needed to find their way again,” Hollande said in a commentary on the wave of support for the national team that has been in disgrace in recent years.

“We saw it at the time of the attacks. We came together in the dramas, we had to find ourselves in the happiness, to come together,” he wrote in the Journal du Dimanche.

The November 13th attacks across Paris left 130 dead. The Stade de France where France were playing Germany at the time was one of the sites targeted by suicide bombers along with the Bataclan concert hall and cafes that are now packed again.

Hollande said French team playing in Sunday’s final had been “very marked” by the attacks.

“The attacks were the same for them,” he wrote.

“They have decided they want to bring joy to the French people who experienced those events.

“They want to give happiness. (Didier) Deschamps has given them this desire to make people happy. They know that this isn’t just any ordinary moment in time,” Hollande said.

On November 13th, the suicide bombers did not get into the stadium but one person was killed — a Portuguese man whose family has said there should be a tribute at Sunday’s match.

The buildup to the tournament was dominated by fears that it could be a target for more attacks but also by weeks of strikes and protests over the government’s bid to reform labour laws.

Hollande has this year recorded some of the lowest popularity scores for a post-war French president, but might still stand for re-election next year.

He admitted that reality would eventually crowd in even if France wins Sunday’s final.

“Sport allows people to come together but politics divides people,” he said.

“The Euro sweeps away everything else, it brings people together, but life will resume afterwards.”

“I support the French team, I go to all their matches but I don’t want to use sport for politics. That’s not good for sport or for politics.”