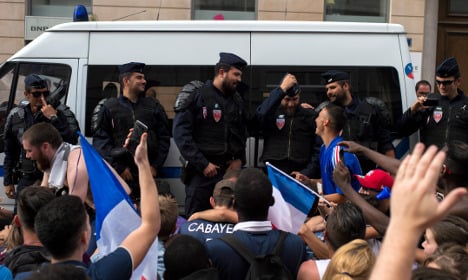 On Sunday, in addition to the thousands of police on the Champs Elysees, nearly 1,300 officers will be deployed at the Stade de France. Photo: AFP

But even if France win Euro 2016, there will be no victory parade on Monday because of security concerns, Michel Cadot said on Saturday.

“It is just not possible, we cannot allow big crowds to circulate freely on Monday,” Cadot told a press briefing.

Security barriers are already being erected on the renowned avenue for the annual Bastille Day parade on Thursday, which would make the presence of several hundred thousand people for a players’ victory parade impractical, the police chief said.

More than one million people gathered on the Champs Elysees in an explosion of national joy after France won the 1998 World Cup in Paris.

Hundreds of thousands returned the next day for an open-top bus parade by the team on the Champs Elysees.

On Sunday, in addition to the thousands of police on the Champs Elysees, nearly 1,300 officers will be deployed at the Stade de France north of Paris and almost 1,400 police will be stationed at the Eiffel Towar fan zone where a 90,000 crowd is expected to watch the match on giant screens.

Another 700 police will patrol public transport.

Skirmishes between supporters and riot police broke out on the Champs Elysees on Thursday following France’s 2-0 semi-final victory over Germany.

The buildup to the month-long tournament was overshadowed by concerns it would be a target for a jihadist attack.