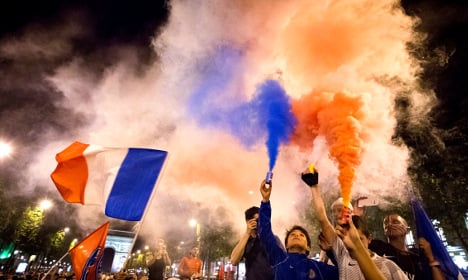 France appears to be falling in love with its new team. Photo: AFP

As the host nation’s new sweetheart Antoine Griezmann and his team-mates prepare to do battle with Cristiano Ronaldo’s Portugal in Sunday’s final, an unfamiliar feeling of national expectancy has spread.

The build-up to Euro 2016 was overshadowed by fears that the tournament would be the target of a jihadist attack — tens of thousands of police will be on duty this weekend to ensure the final passes off safely — and by worries that striking workers would paralyse planes and trains.

Those fears have so far proved unfounded and the nation has slowly got behind the team in a way that resembles 1998, when France won the World Cup on home soil.

“It makes me happy to see, people are finally coming out on to the streets. It’ll do the country a lot of good,” said Pierre Lefebvre, a supporter on the Champs Elysees celebrating the 2-0 victory over Germany on Thursday with the colours of the French flag drawn on his cheeks.

When the French team bus carrying the players sets off from the hotel for matches, a larger and larger crowd has gathered with each game, whether in Paris or in the southern city of Marseille or Lille in the north.

“Before we came to the stadium we saw people going crazy — they are going to be even crazier on Sunday,” said France coach Didier Deschamps after Thursday’s semi-final.

“With all the bad news around — the 2015 attacks, the strikes, the economy, which is not in a good way — the Euro can heal the pain of a country that has suffered a lot in recent months,” said Jerome Fourquet, head of the IFOP polling institute.

France appears to be falling in love with its new team after it was tinged with scandal and badly under-performed for a decade.

At the 2010 World Cup in South Africa, the players infamously went on strike, refusing to leave their bus — to global ridicule — in a feud with then coach Raymond Domenech.

Just five players remain in the current squad from the 23 involved in the stormy 2010 tournament.

The tide of widespread disillusionment with the team seemed to turn in 2013 when they beat Ukraine to qualify for the 2014 World Cup in Brazil, where they exited to Germany at the quarter-final stage.

Now the fans have new heroes — the diminutive Griezmann and Paul Pogba, the tall and rangy midfielder who seeks out his parents for a hug in the stands after matches.

“I’d like to thank Didier (Deschamps) for making me like the France team again,” Lilian Thuram, his team-mate in the 1998 World Cup-winning team, told TF1 television on Thursday.

Deschamps himself said: “This team is loved because it makes people love it. It’s not perfect, but that’s what gives it its charm. You can identify with it. The players have a will to win and they show their emotions.”

Before the tournament, the coach decided not to select star striker Karim Benzema for the squad after he was charged with complicity in a sex-tape blackmail scandal involving international team-mate Mathieu Valbuena.

The French Football Federation said the “unity” of the squad had been the motivating factor. Benzema — who is of Algerian descent — accused Deschamps of racism but few rallied to his cause.

“It is undoubtedly one of (Deschamps’) successes to have chosen a squad which looks like it’s together and united,” Mathieu Quidu, sports sociologist at Lyon 1 University, told AFP.

“Where there have been fires that people have tried to start, they have quickly been put out.”

But while the fans identify with their team again, could their success lead to lasting benefits for France’s divided society?

“It could show that everything has not gone to the dogs, that when France comes together it can still be successful,” Quidu said.

However he warned: “Very quickly, cold, hard reality will catch up with us.”

France and its football team have been here before — in 1998, the myth was presented of a “black-blanc-beur”, or “black-white-Arab” team, a set of players including star midfielder Zinedine Zidane who reflected a harmonious multi-ethnic society.

Reality soon crowded in and the image was destroyed.

Deschamps captained that team and is reluctant to make such lofty claims for his set of players.