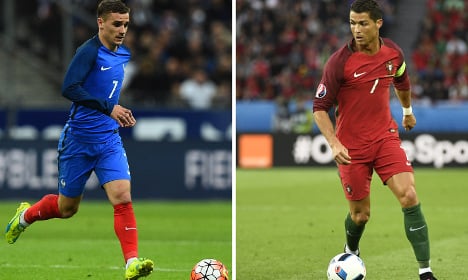 Like Griezmann, Ronaldo made a slow start to the tournament. Photo: AFP

Griezmann, 25, is the tournament’s top scorer bidding to deliver success for the home nation in his first major international final.

Ronaldo wept teenage tears after Portugal’s 1-0 loss to Greece in the Euro 2004 final and at 31, he knows he may not get a better chance of success with his country.

“Euro 2004 was special — I was just 19 and it was my first tournament,” Ronaldo said after scoring a magnificent header in Portugal’s 2-0 semi-final win over Wales.

“Now we are in the final again and we hope we will win it. I hope that we’ll be smiling and that it will be tears of joy in the end.”

Griezmann has already had a tearful tournament exit, having cried on the pitch at Rio de Janeiro’s Maracana after France lost to Germany in the 2014 World Cup quarter-finals.

He appeared close to tears again six weeks ago following Atletico Madrid’s Champions League final defeat by Real Madrid, in which he blasted a second-half penalty against the bar.

He atoned, partially, in the penalty shootout, but Ronaldo had the last laugh, tucking away the fifth and final spot-kick to secure his third European title.

It is Griezmann, however, who has captured imaginations at the Euro and he provided another exhibition of his talents with a brace in the 2-0 semi-final win over Germany.

“He’s a great player,” said France coach Didier Deschamps. “In this Euro, he’s been decisive for us. He can score, and he can help others score.”

Disappointing in France’s opening 2-1 win over Romania, Griezmann came off the bench to head in a crucial late goal in the 2-0 defeat of Albania.

But having started the tournament on the right flank, it was only after being moved behind Olivier Giroud at half-time of the last 16 clash with the Republic of Ireland that his tournament sprang to life.

He scored twice in the second half, found the net again in the 5-2 last 16 defeat of Iceland and downed Germany almost single-handedly in Marseille on Thursday.

Paul Pogba went into the tournament as the heir apparent to Michel Platini and Zinedine Zidane. But L’Equipe newspaper dubbed the team the “Griezmann Generation” following the defeat of Germany.

Griezmann is the first player to score six goals at a Euro since Platini, who netted nine times when France triumphed as hosts of the 1984 tournament.

Ronaldo’s goal against Wales saw him equal Platini’s record of nine goals in Euro finals, but whereas it took the Frenchman one tournament to set his mark, it has taken the Portugal captain four to equal it.

Like Griezmann, Ronaldo made a slow start to the tournament.

He was widely ridiculed for accusing Iceland — population 330,000 — of having a “small mentality” after the 1-1 draw between the teams and then slammed a penalty against the post as Portugal drew 0-0 with Austria.

But he scored twice in the 3-3 draw with Hungary that secured Portugal’s last 16 place and after two games without a goal, he settled the semi-final against Wales with a goal and an assist for Nani.

With his great rival Lionel Messi’s Argentina career up in the air — the Barcelona star announced his international retirement following a defeat on penalties by Chile in the Copa America final — Ronaldo has an extra incentive to win on Sunday.

Like Messi, he has never won a global or continental tournament with his country.

Lead Portugal to a first major title, and a fourth Ballon d’Or — the prize he covets above almost all others — would swim tantalisingly into view.