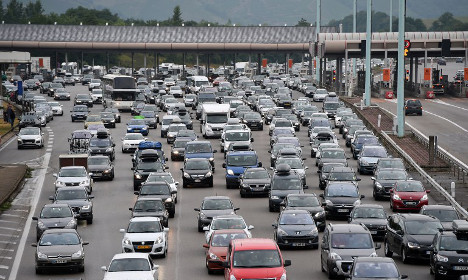 Photo: AFP
Summer is in the air, the French are in the Euro finals, and the roads are going to be absolutely packed. You can't have it all.
France's traffic info service Bison Futé is forecasting a tough day on the roads for the Greater Paris region on Friday as the capital's residents head off on holiday en masse.
The capital has been issued a red warning, the second highest warning on the agency's four-tiered warning system. The agency urged drivers to avoid leaving the city between 3pm and 7pm and to avoid crossing Lyon at the same time.

The entire country has been slapped with a red warning on Saturday. The agency warned that roads heading towards Spain will likely prove to be chaotic (including around Bordeaux) and many southern motorways will be packed as holiday-makers head to the coast.
Motorists have been advised against leaving Paris between 7am and 5pm on Saturday, if possible, and to essentially expect delays around any of the bigger cities in the country.
The agency also advised motorists to avoid highways to the north of France from 11am to 2pm, and highways in the south from 9am to 3pm.
Read more information about this weekend from Bison Futé here (in French).
Le Parisien newspaper has set up an interactive map of France showing exactly which areas are being hit by heavy traffic in real time. Check it here.
Predicted traffic warnings from the agency noted that things will get a lot worse in the late July and early August as school holiday clashes will see much of the country heading on holiday (or home from holiday).
Saturday July 30th will see the first “black” day of the summer (the highest level of warning from the service), followed by another on Saturday August 6th.