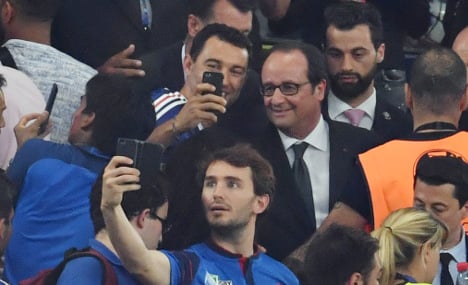 You have to feel a little sorry for François Hollande.

The French president is the only person in France who has not been given a lift by the country’s football team.

Hollande as we know is also known as “France’s most unpopular president ever”, a name he was given after almost daily opinion polls revealed not many people liked him.

But Hollande would have been looking forward to Euro 2016 in the hope that Les Bleus could help spark a little bit of life into his popularity ratings.

Because that’s what normally happens to heads of state when the country’s football team plays well.

Not so, say the experts, because Hollande’s popularity has sunk low it cannot be rescued.

“The economic outlook remains uncertain,” pollster Yves-Marie Cann told Le Figaro. “Hollande has been facing a difficult political situation for months, which has resulted in a popularity rating of just 15 percent.

“Any resurgence in popularity will not be sustained unless there’s more good news and on top of that it needs to be accredited to the head of state,” said Cann.

“Triumphing in the final of Euro2016 would not be sufficient to reverse the trend, at the most it would allow Hollande to gain a little breathing space, due to the improved morale of the French public and the collective emotion it will generate.”

Still Hollande is certainly doing his best to get involved.

A genuine football fan, the president was present in the stadium on Thursday night to see his country’s team beat Germany. He was pictured having selfies taken with fans around him and also took to Instagram to express his joy.

But Hollande needs to go further it seems.

“When we think of 1998 we remember the images of Jacques Chirac in the dressing room mingling with the players and sharing with them the joys of victory, that helped improve his image in the eyes of the French,” said Cann. The French president will have to think of something spectacular. Perhaps jumping in the post-match bath naked to celebrate with the players would do the trick, preferably with a few photographers around.

If he's not prepared to do it, then he might as well just give up on his hopes of getting re-elected next year.