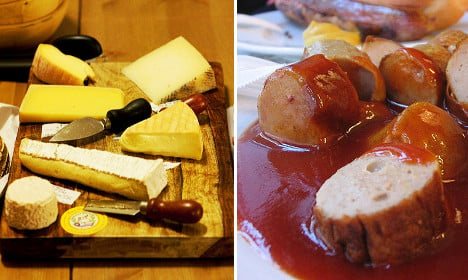 When it comes to food, at least, we all know which is "wurst". Photo: Matt Biddulph/Flickr and Szusi/Flickr
Here at The Local France, we've promised to put all national loyalties aside to support France in the Euro 2016 tournament.
Now faced with the mighty Germans on Thursday night, we have compiled this extremely unofficial study into which of the two countries is best (when you put football to one side, of course).
And – spoiler alert – France comes out easily on top (although the Germans disagree, apparently).
Here's why we rate France as the top dog.
Language
French is a romance language, and is  favoured in diplomatic circles. Meanwhile German’s mathematical-like grammar rules and ridiculous compound words leave it wide open for mockery.
For example “Rindfleischetikettierungsüberwachungsaufgabenübertragungsgesetz” was the word for the old law for the delegation of monitoring beef labeling. Right… Germany's favourite food is “wurst”
If you are into ground raw pork shaped like a hedgehog, with sliced raw onions serving as its quills – a delicacy called Mettigel (made from Mettwurst), then OK, Germany is for you. But the fact that Germany's most famous grub is called “wurst” says it all.
Compare those sausages with France’s cheese varieties, joy-inducing pastries and tasty dishes like Boeuf Bourgignon, or Coq au Vin then it's a no brainer. (Photo: Sophie/Flickr)
Landscape
If you're up for an icy dip in the Baltic or North seas then Germany’s got you covered. Though watch out for passing cargo ships. On the other hand, France’s 3,427 km of coastline (Germany has 2,389 km) is home to pristine beaches on the English Channel, Atlantic Ocean and Mediterranean Sea, which attract thousands of German tourists each year.
Then there are the mountains. France's highest – Mont Blanc – 4,807 m, Germany's highest – Zugspitze 2,963 m. Enough said. Photo: GoogleMaps
Music
Germany might be the home of classical music greats like Beethoven and Bach, but the world has moved on a bit from the 18th and 19th centuries.
France’s modern international stars like Grammy-award winning Daft Punk and David Guetta are still turning out hits and packing concert halls, whereas even The Local Germany ridicules the German pop music scene with its “bands” like Tokio Hotel and Modern Talking topping the country’s charts. A member of Daft Punk. Photo: AFP
Fashion sense
France is home to legendary fashion labels like Chanel, Christian Dior and Hermés and Parisians somehow manage to look like they have fallen out of bed in trim, stylish clothing.
Whereas the German contribution to global fashion, with a few exceptions like Hugo Boss, seems to be limited to Adidas shoes and sandals worn with black socks. Oh yeah, and lederhosen. Lederhosen. Photo: AFP
The winters
Yes it can get cold in the French Alps in winter, but it’s not shocking and temperatures only really drop at altitude, hence France being Europe's top ski destination.
If we look at the capitals, however, Berlin has a December average of -1C to 3C while in France it's more like 3C to 8C. We can tell you where we'd prefer to be. People run in the snow in front of the Bundestag, German parliament on December 29th, 2014 in Berlin. Photo: AFP
Healthy French
A 2007 study showed Germany had the most overweight people in Europe, though on a diet of beer, wurst and dense bread that may not be surprising. Although the French are getting a bit chunkier they share the title of slimmest people in Europe. Then there’s life expectancy which is 81.5 years in France, compared to 80.3 in Germany. The birth rate is also far higher in France, meaning the future is on this side of the Rhine. Photo: Tony Alter
Productive French
The Germans might hold up their economy to mock the French. After all they have a 6.5 percent unemployment rate while France around ten percent and climbing. But don't be swayed by those stats, because basically the French get more done at work. Despite the oft-mocked 35-hour work week, the French workers are more productive than the supposedly hard-working Germans, at least according to a 2011 OECD study. Lunchtime in Paris? Photo: reynermedia/Flickr
Paris whips Berlin for tourists
Sure Berlin has some great nightlife and an interesting history, but it only gets a third of the foreign visitors that turn up in Paris. With some 30 million tourists a year coming to eat in its famed bistros, visit its renowned museums and wander around its gorgeous streets and river banks there’s a reason the City of Light and not the German capital, is the most visited city in the world.