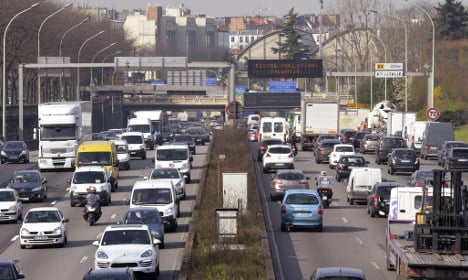 The notoriously polluted ring road could be transformed into a bike- and pedestrian-friendly zone by 2030, after the Paris Council opened a debate on a greener future for the périphérique on Monday.

A commitment was adopted urging the Paris Town Hall to put pressure on the government to decommission the périphérique from the national road network. The idea is the brainchild of the ecologist group Europe écologie les verts (EELV).

A debate will be organised on the subject at the Paris Council by the end of 2017.

If eventually accepted, the project would transform urban landscape of Paris.

The périphérique would become a Parisian boulevard with a speed limit of 50 km/h, as opposed to the current 70 km/h. Lorry drivers might lose their right to use the road, while cyclists and pedestrians would gain greater access.

In a communiqué published on their Paris website, the EELV highlighted their commitment to tackling the ‘symbolic and physical divide between Paris and its surrounding towns’ and said that the ring road could become ‘a place of meetings and activities’ with green spaces and shops.

They added that the transformation could only happen slowly and in line with the development of public transport projects, notably the Grand Paris Express, a group of four rapid automatic metro lines projected to fully open in 2030.

The project would also fight the noise and air pollution that are a blight on surrounding areas. A whopping 1.2 million vehicles use the ring road every day.

Green policies have been gaining traction in a city marred by high pollution levels.

A recent study from the French Health Department found that 2,441 people die a year from air pollution in Paris, with a further 4,166 dying from it in the outer suburbs of the city.

In a bid to tackle the problem, the city recently cracked down on high-polluting old cars (registered before January 1997). They are now banned from being driven anywhere inside the Périphérique from 8am to 8pm each weekday.

Cars older than ten years are thought to cause half of the city's air pollution.

Paris mayor Anne Hidalgo also plans to transform part of the right bank of the River Seine into a car-free zone, just as her predecessor Bertrand Delanoë did on the left bank.

Hidalgo has also introduced an annual car free day in Paris, which has seen roads blocked off to cars and reserved for cyclists and pedestrians.

And on the first Sunday of every month the famous Champs Elysée avenue goes car-free for the day.