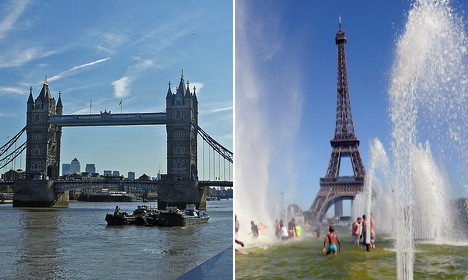 French Prime Minister Manuel Valls unveiled on Wednesday a series of measures to boost the lure of Paris after the Brexit vote raised doubts about London's future as a European finance hub.

He also confirmed a decrease in a company tax previously announced by President Francois Hollande, which will be lowered from 33 percent to 28 percent.

Britain's vote to leave the European Union “created shockwaves, for all European citizens but also, in a very concrete manner, many businesses settled in the United Kingdom,” Valls said.

Most of the measures are tax-related, such as reductions for foreign employees which would be valid for eight years instead of the current five, Valls said.

The prime minister announced a tweak to a system allowing foreign employees to benefit from tax reductions, making it applicable for eight years instead of five.

Beyond these fiscal measures, the government also plans to put in place a “unique entry point” to facilitate administrative matters for foreign companies seeking to set up shop in France.

READ ALSO: Ten reasons why Paris is better than London This service will help companies with questions about real estate, residency permits, schools and other issues.

Valls said France would open “as many international sections as needed in schools” to allow children of foreign employees to have classes in their mother tongue.

The Brexit vote has several European capitals clamouring to take London's spot as a major finance centre and hub for investors and bankers.

'Time to cooperate not compete'

Valls' measures, that came just two weeks after the Brexit vote, appeared to be in contrast to a recent commitment made by the mayors of Paris and London Anne Hidalgo and Sadiq Khan.

The pair promised to cooperate rather than compete amid all the post-referendum uncertainty.

“Despite the outcome of the EU referendum, our two cities must now work more closely together than ever before in order to deliver on our shared agendas,” read a joint letter from the pair published in the French and British press.

Other economists and essayists in France have however suggested Brexit could be beneficial for France.

Essayist Edouard Tetreau said it would be a “windfall” for Paris.

“The City of London would force away all the banks and asset management funds who want to continue to operate in the European market, without the barriers caused by regulations and taxes that would be applied to London-based institutions once they are outside the Union.

Thousands of managers, lawyers, financiers, and also the heads of the European subsidiaries of multi-national companies would have to leave the UK to remain within the EU to continue their work.

Paris is easily the city, along with Berlin, that is best placed to welcome their talents.