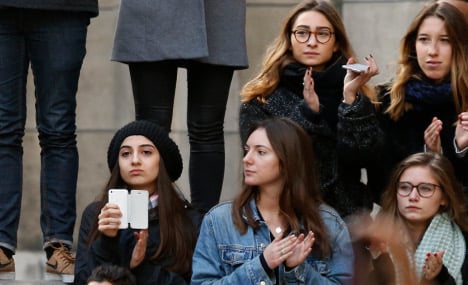 A majority of young people in France also feel dejected by the rejection of the EU by British voters, a new opinion poll has revealed.

Some 59 percent of French people aged 18 to 30 described themselves via emoticons as ‘sad’ about the UK voting to leave the EU, according to a poll conducted by OpinionWay for the newspaper 20 Minutes.

When participants where asked to express their feelings in one word, ‘disappointment’ was the top answer with 81 occurrences, followed by ‘a shame’,  ‘incomprehension’, ‘surprise’ and ‘sadness'.

However a small minority (19 percent) of respondents declared themselves “delighted” by the Brexit.

The reasons why so many young French people felt disappointment echoed those expressed by young Brits in the days after the referendum.

One respondent Kevin described why he was shocked that the British had voted to leave the EU.

“They followed the extreme right and I find that a betrayal. We have always lived with Europe, it's precious.

“For me the EU means freedom. You just need a passport and you can go anywhere,” he said.

Some of the respondents to the survey had personal reasons to feel dejected.

Student Lionel, aged 25 said: “My girlfriend is English and Brexit is worrying for our relationship, because she wants to stay in France after her studies.

“With Brexit that's going to be complicated. I would also like to do an internship in the UK, but the chances of getting chosen are now far fewer,” he added.

Sixty percent of young people who took part in the survey considered themselves French above European, while only two percent felt the opposite – European before French. Some 21 percent said they felt just as European as French.

“I am attached to my country and all the culture that goes with it, but Europe means being open to others,” said 27-year-old Elsa.

The poll echoed similar feelings of sadness and dismay among younger voters in Britain, thousands of whom took part in pro-Europe protests over the weekend.

A survey by Opinium for the LSE found that 47 percent of 18-24 year-olds cried or felt like crying when they saw the results of the referendum.

Some 72 percent of respondents aged 18-39 said that they were ‘frustrated’ by people who had voted differently to them, while 67 percent said they were ‘angry’ and 61 percent ‘disgusted.’

This proportion sunk to 40 per cent among 50-64-year-olds and to only 36 per cent of the over 65 group, prompting anger and bitterness among younger Brits.