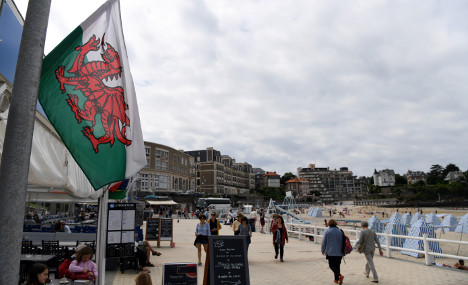 Gareth Bale's Wales have captured imaginations across Europe with their run to the Euro 2016 semi-finals and nowhere are they more popular than in their Dinard base in northwest France.

The sleepy Brittany resort town, which has a population of around 10,000, has played host to Chris Coleman's squad for a month and the mutual affection between players and locals has been clear to see.

The players have been taking walks on the beach, playing football with local youngsters and posing for selfies, while Dinard's shopkeepers and bar owners have festooned the town with Wales flags and window displays.

“The Welsh players are very approachable and close to their fans,” says Didier Dre, who runs a shop selling toys, postcards and beach furniture just around the corner from Dinard's Plage de l'Ecluse beach.

“It brings us (the people of Dinard) visibility in the media. And it creates a nice bit of atmosphere, at a difficult time for France.”

Last November's deadly attacks in Paris, claimed by the Islamic State group, cast a pall over the build-up to the tournament.

But the Wales squad's remote location about 320 kilometres (200 miles) west of Paris has enabled them to banish all thoughts about security from their minds.

“I can't say we feel it here,” Wales manager Coleman said at the start of the tournament. “It's a relaxed atmosphere and that's down to the people of Dinard.”

As well as enabling Coleman's squad to live and train in peace environment, the choice of Dinard as a base for the team had historical and cultural resonance.

Migrants from what would become Wales settled in Brittany in the fifth and seventh centuries after fleeing Anglo-Saxon invaders in Great Britain and there are striking similarities between the Welsh and Breton languages. Staff at the Novotel Thalassa hotel, where Wales are staying, have been applauding the players on their return to Dinard following matches in other parts of France, most recently after Friday's stunning 3-1 quarter-final win over Belgium in Lille.

Prior to the match, the players ventured into town for a walk along the Promenade des Allies, pausing to sign autographs for fans and pose for photographs.

Sam Vokes, a goal-scorer against Belgium, and midfielder David Edwards took part in an impromptu kickabout on the beach, both still carrying ice-creams.

The players bought milkshakes at Davy's Cafe, which proudly displays a Wales flag and a French Tricolore either side of its entrance.

“Everyone supports them. We knew they were coming, so we've been supporting them from the start,” said Mandalina Robert, a waitress from Davy's who served the squad.

On her brush with Real Madrid star Bale, who was seen slurping a Cookie Milkshake, she told AFP: “I knew it was Gareth Bale. But I didn't know he was the most expensive player in the world!

“My friends were a bit disappointed not to have been here.”

Recalling the visit, Bale said on Monday: “We've been received very well here in Dinard. The people, the fans have been amazing, welcoming us. Not just in the town, but back at the hotel after games.

“We're happy to give everyone pictures and autographs. It's been an amazing journey and an amazing place to stay. We'd like to thank them for all the support and the hospitality they've given us.”

Wales play Portugal in Lyon on Wednesday, with a place in the final against either Germany or hosts France at stake.

In reaching the semi-finals in their first major tournament in 58 years, Coleman's men have already surpassed expectations.

And whatever happens against Portugal, there is a small corner of Brittany where they will not be forgotten.