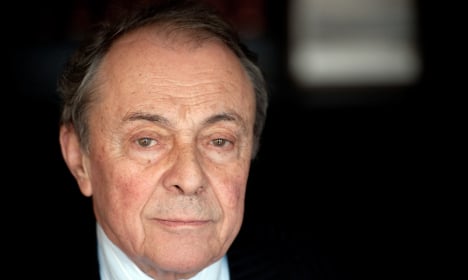 Rocard served as prime minister for three years from mid-1988 under Francois Mitterrand, the two-term Socialist president who led the country from 1981 to 1995.

Rocard, noted for his pro-European stance, died in a Paris hospital, said his son Francis Rocard, an astrophysicist.

President Francois Hollande paid tribute to a man he called “a great figure of the Republic and of the Left.”

Current Prime Minister Manuel Valls spoke of his “great sadness” at the loss of a “visionary statesman.”

Party grandees queued up to praise Rocard's role in re-shaping the French Left over the past five decades.

Party first secretary, Jean-Christophe Cambadelis, indicated that “it is a part of ourselves which dies with Michel,” but added: “We shall continue your battles.”

In describing Rocard as a “man of conviction,” former party leader Martine Aubry said the PS and the French Left “has lost one of its great figures and many of us feel profound sadness.”

Minister of Finance Michel Sapin also paid tribute, saying that “Michel Rocard was able to reconcile the Left with the economy and establish a fruitful dialogue between the Left and business.”

On the political right, former president Nicolas Sarkozy, hailed Rocard's rejection of sectarianism and his “statesmanship” while former rightwing prime minister Alain Juppe recalled his “agile mind, historical perspective, his appetite for debate without concession but without sectarianism”.

Born on August 23rd, 1930 in the Parisian suburb of Courbevoie, Rocard attended the elite National School of Administration ENA, eventually carving out a high-flying political career in a revamped and modernised Socialist Party under Mitterrand.

Rocard became leader of the then United Socialist Party in 1967 as the French Left battled for unity between traditionalists and modernisers and two years later stood for the presidency.

But he obtained just 3.5 percent to exit in the first round beaten by two hard Left fellow candidates who also fell by the wayside as conservative Georges Pompidou triumphed two months after the resignation of Charles De Gaulle.

Rocard served several terms as a lawmaker for the Yvelines region on the outskirts of Paris and 17 years as mayor of the town of Conflans-Sainte-Honorine.

In 1974, he joined Mitterrand's newly-founded Socialist Party (PS) and soon became a vocal critic of the traditional left.

He decided not to stand in Mitterrand's way as the latter successfully won a second term in 1988, after which he was appointed premier.

Rocard served in the post for three years before being “fired” as he saw it.

While in the top government job, Rocard signed a landmark auto-determination agreement ending unrest in the French Pacific Ocean archipelago of New Caledonia.

Overwhelmingly elected PS first secretary in 1993 the party slumped only a year later with Rocard at the head of its list to its worst ever election score — 14.49 percent — in European polls, barely ahead of a radical leftist group led by controversial former Marseille football club chairman Bernard Tapie.

Rocard promptly dropped thereafter any idea of presenting himself as the “natural” PS candidate for the presidency but instead headed for the European Parliament where he served until 2009.