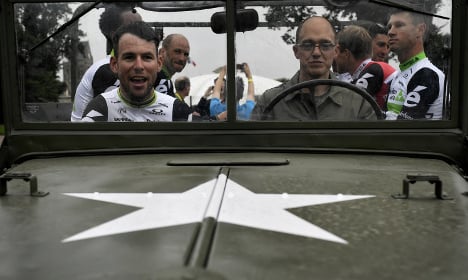 Saturday's first stage of the Tour finished in Utah Beach, one of the D-Day landing sites during World War II 70 years ago.

After collecting the yellow jersey following his victory in a sprint finish, Cavendish was part of a moving ceremony to remember the war dead.

“I wanted to be involved with the armed forces in the UK and to finish here at Utah Beach was an incredible opportunity to remember and respect not just D-Day but those who've fought and died in all wars for our freedom in the western world,” said the 31-year-old Briton, who won his 27th Tour stage.

“I wanted to (dedicate) this victory and say thank you to those great men and women and friends back in the UK who served in the armed forces.”

Cavendish rolled back the years to deliver the perfect sprint finish at the end of the 188km stage, darting out from behind world champion Peter Sagan to streak clear to the line ahead of German Marcel Kittel in second.

He said a change in direction the wind was coming from had forced him to alter his plans at the last moment.

“I was waiting, I wanted to get run. Sagan kicked first where I originally wanted to go but had changed (my mind) with the headwind (rather than tailwind).

“Fortunately Sagan left a gap on the right, I had to take that opportunity.

“Kittel hit terminal velocity, maximum speed and I realised I had something in it.

“I carried on to the line and hoped no-one would get a sling-shot past me. I saw line coming, it felt great!”

It was a rare victory for Cavendish over Kittel and another German, Andre Greipel, who was fourth behind Sagan in third.

The two Germans had dominated Tour sprints over the last three years — Kittel winning four stages in both 2013 and 2014 with Greipel matching that in his compatriot's absence last year.

But Cavendish gave short shrift to suggestions he should be happy with such a rare triumph — he'd won only three Tour stages over the last three years together.

“I don't care what people talk about,” he said irritably. “I have a job to do which is to win bike races.

Cavendish was more relaxed, though, when discussing the pleasure of taking daughter Delilah up onto the winner's podium with him.

“She's my biggest critic, she bases my performances on what flowers I win. Obviously when you win the yellow jersey you get quite beautiful flowers. She's happy with that, I get some dad kudos points!

“My whole family was there — (wife) Peta, (son) little Frey, it was his first Tour stage outside the womb.”