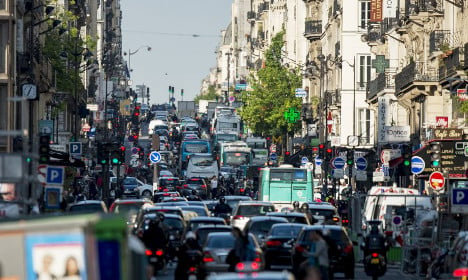 The ever-busy Rue La Fayette in Paris. All photos: AFP
On the same day that France banned plastic bags, Paris introduced a ban on old vehicles from the city roads.
Which vehicles are affected by the ban?
Essentially, it's a ban on all vehicles that were registered before January 1st 1997 and all motorcycles registered before 1999.
There is a full list of the banned cars here.
The vehicles will be banned from being driven anywhere inside the Périphérique ring road, which acts as the city's limits, from 8am to 8pm each weekday.
Why are they banned?
Paris has been cracking down on pollution with a heavy hand lately, and old vehicles play a large part of the problem. In fact, cars older than ten years are estimated to cause half of the city's air pollution.
How bad is the pollution in Paris?
Extremely bad, is the short answer. A recent study from the French Health Department found that 2,441 people die a year from air pollution in Paris, with a further 4,166 dying from it in the outer suburbs of the city. How many old cars are there in Paris?
There are 430,000 cars that are 19 years old (or older), 13,000 motorbikes, and 50,000 trucks, according to Le Parisien newspaper.
The City Hall estimates that the ban will only affect around 10,000 of the 600,000 vehicles on the move in Paris on any given day.
How can authorities enforce the ban?
It will be tricky from the beginning, that much is for sure. After all, police can't just spend all day guessing if a car was registered before 1997.
But Paris is also rolling out a colour-coded sticker system for each car to display on the windscreen, thereby making it easier for authorities to easily be able determine the age of a vehicle. You can get the sticker here for around €4 – but the site launches on Friday so you may need to bookmark it for later.
What's the penalty if I get caught driving my old car?
Fines will be handed out for those caught breaking the rules from October, with motorists slapped with a €35 fine for their first offence. These fines will increase in January to €68 for private cars and €135 for trucks. Any exceptions?
Yes, vintage cars are excepted provided they have are clearly marked as a “voiture de collection”. This also includes old cars used for tourism, such as the famous Citroën 2CV that many guides use to take tourists across the city.
Other exceptions include old cars used specifically for work, such as garbage trucks or armoured vans.
What's the reaction to the ban?
For anyone who likes cleaner air, the reaction is likely to be a positive one. But for those who own old cars, there's a fair bit of flapping.
They've organized a protest across Paris on Friday, and met at Place de la Concorde at the end of the Champs-Elysée for a minute-long standstill at 8am when the ban began. Then they're driving around the city in their old, banned cars.
Hang on, they're protesting by driving their old cars even more?
Yes that's right. They say they've been discriminated against and have called on motorists affected to gather “in memory of the principal of equality” and to drive around Paris from 8am, in other words, from exactly when the ban comes into place. Will the motorbike associations protest too?
Funny you ask. The group Fédération des motards has also called for a protest on July 8th, calling on members to carry out some serious “disobedience” and “resistance” to the new laws.
“Under the pretext of purifying the air, the City Hall is going to cull thousands of vehicles that are in perfect working order and that aren't any more polluting than the latest SUV,” the group said.
They argued that the only people who will actually benefit from the law are car manufacturers, and that those who will suffer most are those who live far from public transport hubs, especially those with less money like students, trainees, and the unemployed.
What if I've got an old car?
The City Hall is trying to encourage people to take their old cars to the scrapyard by offering a €400 incentive that can be put towards a Navigo travel pass, a Velib bike pass, an Autolib electric rental pass, or the purchase of an electric car or bicycle. Will this be rolled out across the rest of France?
Possibly. Paris is the first city in France to put the ban in place, but eight other major cities can do it too if they wish, reported Le Monde newspaper.
Europewide, over 200 cities have implemented similar bans on old cars, some have had one in place for around 20 years already.