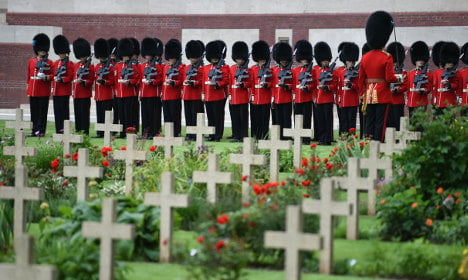 Britain and France on Friday marked 100 years since their troops fought and died side by side in the Battle of the Somme, one of the defining offensives of World War I.

Britain's royal family, Prime Minister David Cameron and French President Francois Hollande took part in the official commemoration at the Thiepval Memorial in northern France in remembrance of around one million who were left dead, injured or missing in the 141-day battle. Drenched in military pomp and ceremony, the commemoration comes just a week after Britain voted to leave the EU. Hollande highlighted the friendship that united the countries' troops during the battle.

“I want to recall that it is the European idea which allowed us to overcome divisions and rivalries between states, and which has brought us peace for the past 70 years,” Hollande said in a statement before the ceremony.

Under grey skies, military bands played to some 10,000 guests at the memorial, after the screening of the 1916 film “The Battle of the Somme” with its devastating images of troops going over the top of trenches to their death.

The commemoration kicked off at the deep Lochnagar crater, created by the blast of mines placed under German
positions two minutes before the attack began at 7:30 am on July 1, 1916.

A lone piper walked around the edge of the crater. (A Scottish bagpiper plays next to the Lochnagar Crater, a mine crater created after a British mine exploded, marking the launch of the British offensive against the German lines, at Ovillers-la-Boisselle) (People stand around the Lochnagar Crater, a mine crater created after a British mine exploded, marking the launch of the British offensive against the German lines, at Ovillers-la-Boisselle)

The day began with the blast of whistles on a former battlefield and in Parliament Square in London at 7:30 am sharp to mark the start of the offensive.

The previous night Queen Elizabeth attended a night-long vigil in Westminster Abbey while her grandson Prince William was in France along with his wife Kate and brother Harry for a vigil at Thiepval.

William paid tribute to a generation lost at the Battle of the Somme — with 20,000 soldiers dying on the first day alone in the deadliest day in British military history.

“We lost the flower of a generation, and in the years to come it sometimes seemed that with them a sense of vital optimism had disappeared forever from British life,” said William.

“It was in many ways the saddest day in the long story of our nation.”

The Battle of the Somme, involving troops from across what was then the British Empire, moved the frontline only a few miles.

“We acknowledge the failures of European governments, including our own, to prevent the catastrophe of world war,” said Prince William.

At Friday's ceremony narrators such as actor Charles Dance — who played Tywin Lannister in Game of Thrones — and actress Joely Richardson read out letters and memories of the war and a choir sang the patriotic song “Keep the Home Fires Burning.”

(People attend a ceremony at Ovillers-la-Boisselle on July 1, 2016 to commemorate the centenary of the battle of the Somme) (French soldiers stand guard as they arrive to take part in the memorial ceremony on July 1, 2016 at the Thiepval Memorial)

'A place of ruin and death'

The attritional battle became a defining event in the war, symbolising the horrors of trench warfare and the futility of the conflict. It was also the first battle in which tanks were used.

The Battle of the Somme was a tragedy not only for British, French and German troops, but also Commonwealth nations whose soldiers fought for Britain.

Hollande read out an extract of George Duhamel's “Civilisation”, written in 1918, which described the fighting and its aftermath.

“Morning broke. To those of you who have witnessed the dawn in wartime fields, after nights spent in combat or consumed in tireless and bloody work as ambulance personnel, you will have known one of the ugliest and saddest faces the world could ever offer,” read Hollande. (Young people holding flowers bouquets and cockades walk among the graves as they take part in the memorial ceremony on July 1, 2016 at the Thiepval Memorial)

Cameron recounted a brief unofficial truce on the frontline when the Germans laid down their weapons while a British infantryman went to rescue a wounded comrade.

For his part Prince Charles narrated an account of the devastated battlefield from the writer John Masefield.

“There is nothing white, nor alive, nor clean, in all its extent; it is a place of ruin and death, blown and blasted out of any likeness to any work of man, and so smashed that there is no shelter on it,” he said.

“All wars end; even this war will someday end, and the ruins will be rebuilt and the field full of death will grow food, and all this frontier of trouble will be forgotten.”

A century on, the eerily calm, bucolic Somme farmlands belie the slaughter wrought there, and are now the haunt of tourists visiting some 400 war cemeteries across the region, and the overgrown warrens of trenches.