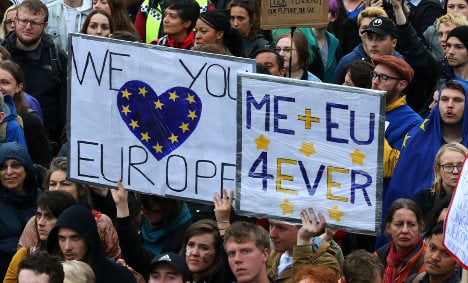 “I've heard a lot of people saying that the Brexit vote was won by a mixture of racists, empire sentimentalists, and people who think that politicians' promises and tabloid headlines are literally true.

That must be an exaggeration, though personally I can't think why anyone would want to believe some of the false statistics and xenophobic nonsense that was being trumpeted in the pro-Leave newspapers unless they really wanted it all to be true.

There are also, of course, Brits who have genuine economic and political grounds to believe that the EU isn't working, and that a financially wasteful bureaucracy, empowered to intervene in every aspect of our lives, isn't the way to govern Europe (although I suspect that that last category is a small minority of those who voted to leave).

But putting aside all the scare stories on both sides of the referendum campaign, I think there's another reason why Britain voted itself out.

Last year, when I was researching my novel, Merde in Europe, I spent quite a bit of time in Brussels talking to the people who worked there. I asked them what they thought of the absurd stories about Europe that have been peddled in the British press for the last few decades.

All of us Brits have seen them – Brussels wants to ban English sausages, smoky bacon crisps and bagpipes; the EU wants to rename Waterloo Station and the English Channel; eurocrats want to forbid singing in pubs and barmaids' cleavages. The usual stuff.

The eurocrats I spoke to had heard of some of these, but were astonished by the sheer number of them – I'd brought a whole catalogue with me.

Most of these euro-myths were perverse interpretations of actual European laws. The “sausage ban” story, for example, was inspired by an EU ruling on the definition of meat products – basically, some of the scrag ends scraped off bones and skin can't be called “meat” any more, much to the chagrin of certain sausage-makers.

The “barmaids' cleavage” fable was based on a ruling about protecting outdoor workers from excessive UV exposure.

The “renaming Waterloo” rumour emerged after an off-hand remark from a British eurocrat that it probably annoyed the French.

It was all so easy to contradict and explain (which is exactly what I do in my novel), so I asked the people in Brussels why the EU didn't do so.

The answer I got from their press department was honest, but scary: we don't dare stand up to the British press, they told me, because it'd only get worse.

That was all very well when the tabloid stories were just so much ambient noise while the EU got on with its work, but not in the context of a referendum campaign. And anyway, staying out of the public opinion battle for so long, or rather acting as though they were above it, has so dented the EU's credibility that even a well-argued, amusingly-worded rebuttal of every single lie would have been ignored by a large chunk of the British population.

The Scots and Northern Irish knew this, and voted accordingly, but some of those pro-Brexit English cities might have thought again.

What it all comes down to is that, even if you believe in the need for European Union and the single market, and love the idea of being able to travel the whole continent freely in search of work and education, you have to admit that Brussels is out of touch with, or unable to cope with, public opinion about it.

It's not really surprising when almost no one in Europe knows who their MEP is (I've never met anyone who cares), and when so many eurocrats are so privileged and so conscious of their power.

The sad thing is that I found that everyone I met in Brussels when I was there for my research was fundamentally well-intentioned. They were a bunch of (admittedly overpaid) teddy bears who wanted everyone in Europe to have clean water, clean air, healthy food, unpolluted beaches and safe working conditions.

They didn't want to ban anything useful or fun, and they wanted us all to be able to trade safely on the internet, have access to cheap utilities, and drive safely on the roads.

They were also very willing to share a few pints of Belgian beer with a visiting British writer, which made them even more talkative, so I got to know them pretty well.

The Leavers say they wanted to “take back control”, but quite frankly, I would trust the people I met in Brussels much more than any Westminster government, with its short-term, “let's get ourselves re-elected” policies.

The trouble is, no one really knows who these EU officials are, or what they do. And if they want the EU to survive, I think they have to step down from their generously funded pedestal and start telling us.“ Stephen Clarke's latest novel is Merde in Europe, about a Brit who goes to work in Brussels and tries to find out what everyone really gets up to.