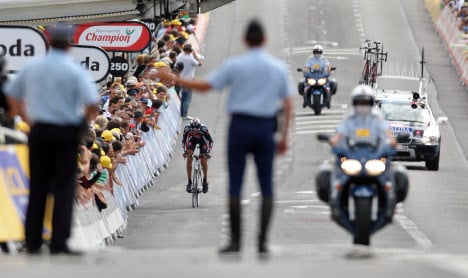 Elite special forces have been assigned to protect the Tour de France from a potential terror threat during July.

Just seven months on from the Paris terror attacks that left 130 people dead, authorities are taking no chances during the nation's biggest yearly sporting extravaganza.

As well as the elite GIGN special operations unit of the National Gendarmerie, there will be 23,000 police mobilised to handle security at the Grand Boucle.

Each of the 22 teams of nine riders has been assigned a dozen policemen to look after them while a police command post is being set up at the finish of every stage.

Cazeneuve added that the terror risk remained “very high”, meaning that the anti-terror unit will be kept close at hand to be able to react as quickly as possible to any attacks.

“Given the exceptional characteristics of the event, which lasts a month and covers 3,500km of route, our aim is to ensure in the best way possible the safety of the riders and fans, all the while without impinging on the festive atmosphere,” said Cazeneuve.

The Tour is expected to be watched by 10-12 million people on the streets over the three weeks while it is followed by 2,000 journalists and watched in 190 countries, according to organisers ASO.

They also claim 3.5 billion TV viewers will tune into the race.

The interior ministry insists on its website that the country's police force will not be relaxing their guard once the Euros are finished on July 10th.

“When it's not the Euros, it's cycling,” says a message on the website.

The site also pays tribute to the forces of order which it describes as “exhausted” due to their extra commitments since the November attacks.

These commitments were brought on first by a state of emergency and now by the need to provide security to two massive sporting events during the summer months, not to mention regular protests against an unpopular labour law.