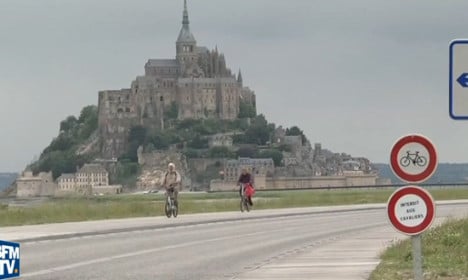 Given the stunning back drop it’s not hard to see why Tour de France organisers chose Mont St Michel as the starting point for the 2016 Grand Boucle.

Yet the choice has rubbed salt in to the wounds of many locals, who are ironically subject to a strict ban on bikes – possibly the only one of its kind in the country.

Between the months of May and September no one is allowed to access Mont-St-Michel by bike, between the hours of 10am and 6pm.

The ban was brought in in 2015 after the opening of a new pedestrian bridge, which is reserved for the shuttle bus service and horse and carriages. Bicycles were banned from the Mont because authorities believed they would make life more difficult for the hordes of pedestrian visitors.

Yet on Saturday locals will have to watch on as hundreds of professional cyclists head off on the “greatest cycle race in the world” from the foot of the hill top abbey.

Locals and cycling associations have slammed the hypocrisy of the decision.

The association Vélocité has long fought for the Unesco World Heritage site to be open to cyclists and  believes Mont-St-Michel is the only place in France that bans cyclists.

Blanchet said he could understand the ban in July and August but not May, June and September.

“This is a problem for locals who go to work by bike and also for tourists on cycling holidays,” Blanchet said.

Jean-Yves Lebrec a resident of Mont-St-Michel said: “Authorities make use of the Mont-St-Michel for all kinds of occasions but have no interest in the reality of daily life here.

“They have a total lack of knowledge of what is going on,” he said.

Disgruntled locals are expected to make their feelings known on Saturday though they have promised not to follow the example of France's protesting farmers or trade unions and block the road with piles of burning bicycle tyres.