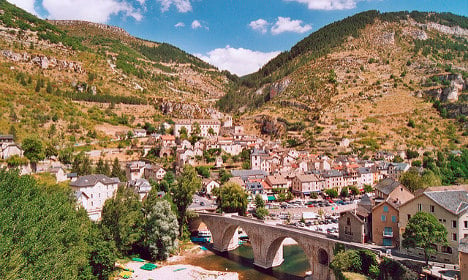 How many have YOU been to? For a real taste of Breton culture, Dinan is the place to go. With cobblestoned streets,1.8 miles of stone ramparts and beautifully preserved 13th century architecture (particularly visible in Place des Merciers of the Old Town) a trip here is like a step back in time.

For those that can make it up the 158 steps of the clocktower, the view from the top over the medieval town and the surrounding area should not be missed.

Try to coincide a visit with the Fête des Remparts (medieval festival) during the final weekend of July.

Perched on a rocky hill overlooking the river Arz, Rochefort-en-Terre is a quaint Breton town with only 697 habitants.

Famous for its impressive flower arrangements, gothic buildings and Renaissance homes, Rochefort-en-Terre also has to its name a fine fortified medieval château.

Named France's favorite village in 2016, Rochefort’s quiet streets are bound to get noisier soon – but if the town is too busy you can always escape for a hike in the surrounding countryside.

A picturesque town on the Normandy coast, Étretat was a much-loved subject of the nineteenth-century Impressionists and is now a popular seaside getaway.

Monet was enchanted by its rugged backdrop and returned many times to paint the famous Étretat cliffs – beaten by the sea into dramatic arched and needle forms – which loom grandly over the English Channel.

The perfect starting place for windswept walks and an ice cream on the beach.

Found in the very rural Franche-Comté region in eastern France, Arbois is a must for wine lovers.

It prides itself on having the vineyard with the very first AOC (appellation d'origine contrôlée) wines of France, designated in May of 1936.

It's the ideal place for those looking to sip their wine while breathing crisp mountain air yet avoiding the hoards of tourists who flock to the Alps over the summer months.

Situated close to the German border and only a short drive from Colmar, Eguisheim is a colourful town at the heart of the Alsatian wine route.
Voted France’s favourite village in 2013, Eguisheim’s winding concentric streets overflow with fairytale spires, lively floral decorations and slanted half-timbered buildings. Great for evening strolls and good wine.

This small town, nestled at the top of the Gorges du Tarn in southern France, dates back to the 7th century. The limestone houses and cobbled streets descend in tiers from the foot of an ex-Benedictine monastery.

Legend has it that the town takes its name from a princess, Enimie, who was cured of leprosy by the water from the spring in the village. Ask any resident and you'll find that these tales are still alive in local lore.

As if the fountain of youth weren't enough, the area is also famous for its vulture and eagle spotting — you can head to the Vulture lookout to spot birds of prey unique to the region that migrate each year from Africa.

Surrounded by vineyards, Saint-Émilion is best known as the centre of the Bordeaux wine region that bears its name.

Wine-tasting is obviously essential, but if you’re here for more than grapes, the Cordeliers Cloister, Château du Roi and Catacombs are all well worth a visit. The city is steeped in history and is a UNESCO world heritage site, so expect impeccably preserved buildings, all built from a beautiful yellow limestone. When the valleys below are shrouded in mist, the hilltop town of Cordes-sur-Ciel appears to be sitting upon the sky – hence its magical name.

With its fortifications, gothic buildings, medieval gateways and chapels, Cordes-sur-Ciel has a time-warp feel, and this effect is amplified in July when the Grand Falconer’s Festival opens and the streets fill with people in medieval garb.

Highlights include the Musée de l'Art du Sucre et du chocolat (dedicated to artworks made of sugar) and the Jardin des Paradis, officially recognised as one of the most ‘Remarkable Gardens in France’. Beaune is known as the wine capital of Burgundy. A trip wouldn't be complete without a wine-tasting tour, either on bike or foot through the beautiful vineyards, or else in one of the wine caves that are dotted across the town.

The historic town has original features from pre-Roman era as well as the medieval and Renaissance periods, making it a fascinating place to wander around, for anyone who hasn’t over-indulged on the wine.

And we can't not mention another famous specialty of the Burgundy region: Escargot.

Typically ‘Dordogne’, but not yet taken over by the British, Souillac is the perfectly quintessential French town, with tiny cobbled roads and some of the best food in the region.

While it is located between better known Sarlat and Rocamadour and within cycling distance of numerous caves, castles and farms, it retains the peaceful, sleepy charm that other parts of the Dordogne may have lost in more recent years. To explore the Regional Natural Park of Brenne in central France, stay in its historical town of Le Blanc.

Often referred to as “the land of a thousand lakes”, the park is characterised by the unique wildlife and biodiversity that is found here. From plants, to birds, to butterflies, to wild boar; it’s a nature lover’s dream.

Nestled in the hills, Uzès is a good place to visit if you’re looking for something off the radar in Languedoc.
Surrounded by a clutch of tourist hotspots, Uzès is something of a shrinking violet in the Gard region. But it brims with historical interest, including a beautiful medieval garden, two castles, three feudal towers and the magnificent eleventh-century Tour Fenestrelle.

Ars-en-Ré is the largest town on the Île de Ré, an island just off the west coast of France, near La Rochelle. The simplicity of the town and the laid-back way of life is what most French people love about it.

If you can find time between lounging on one of the beaches and sipping coffee at one of the cafes surrounding the harbour, be sure to hire a bike to peruse the vineyards and learn about the salt farming that goes on in the surrounding area. Leave Saint Tropez and Cannes to the celebrities — the view from this hilltop town on the French Riviera really can't be beat.

If you can tear yourself away from the panorama, take a stroll through the cobblestoned streets and let your eyes feast instead on the hot-pink bougainvillea flowers adorning every other building and the plethora of art galleries. Your nose will be pleased as well if you step into one of the many perfumeries in town. According to Lonely Planet, Hyères was ‘the original French Riviera.’

Famous names such as Tolstoy, Queen Victoria, Rudyard Kipling and DH Lawrence flocked here in the 19th and early 20th centuries, and although Saint-Tropez, Nice and Cannes have since eclipsed Hyères in terms of international fame, it is still a favourite for natives on holiday.

From Hyères you can catch a ferry to the Îles d’Hyères or ‘golden islands’, situated just off the coast in the glittering  Mediterranean. If you’ve escaped mainland France for Corsica, make sure you go to Centuri, a pretty fishing village on the northwest cape full of colourful buildings and crumbling Mediterranean charm.

It’s a lovely place to enjoy a traditional Corsican lunch (lobster is a specialty), soak up the tranquil local atmosphere and watch the fishing boats bobbing in the crystalline harbour.