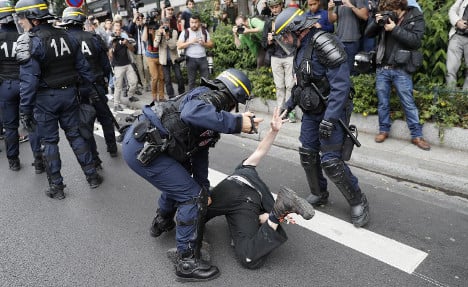 French anti-riot police officers hold a man during a demonstration against controversial labour reforms, on June 28, 2016 on Bastille Square in Paris. Photo: AFP
At least 30 protesters have already been arrested, reported the BFM TV channel, as the marchers reached the Place de l'Italie late on Tuesday afternoon.
Police estimate that around 15,000 people took part, some of whom took to vandalizing bus shelters and upturning rubbish bins along the route.
Unions reported crowds of 55,000. The march, along with a strike that shut down the Eiffel Tower, came as the French Senate prepared to vote on the hotly contested reforms aimed at reining in unemployment by freeing up the job market.
Seven unions on Tuesday submitted what they called partial results from a public survey on the draft law, with 92 percent of 700,000 respondents calling for its withdrawal. Photo: AFP
French President Francois Hollande said last week that his government would “go all the way” to enact the reforms, which are seen by critics as too pro-business and a threat to cherished workers' rights.
“It is essential not only to allow businesses to be able to hire more” but to step up training that will lead to more jobs, he said.
Prime Minister Manuel Valls will meet union leaders on Wednesday and Thursday but has already signalled he is not open to further modifying a text that has already been watered down.

Valls, who has been a lightning rod for criticism because of his unrelenting stance on the reforms, conceded little by agreeing to the meetings.
The prime minister's office said they would “review” the situation but “it is not a matter of reopening a cycle of negotiations.”
Philippe Martinez, secretary general of the hardline CGT union, said he hoped the meeting would not be a mere “courtesy call just to have a coffee”.
Unions say the main sticking point is a measure giving precedence to agreements negotiated between companies and their staff over deals reached with unions across entire industrial sectors — notably on working hours.

The two sides have not met since early March, though Valls telephoned union leaders on May 28.
Tuesday afternoon saw the 11th demonstration against the reforms since the wave of protests began on March 9.
Many of the protests have descended into violence, reaching a peak in Paris on June 14, just four days after the start of the Euro 2016 football championships in France.
Hundreds of masked protesters and police fought running street battles, and police used water cannon to quell rioters who hurled projectiles at them and bashed in storefronts, with 40 people hurt  and dozens arrested.
The unrest led to a tug-of-war last week when the government initially banned a planned march before allowing it to take place along a shortened route.

Tens of thousands took part in the march, which passed off peacefully under the close watch of 2,000 riot police and after 100 people were arrested for carrying potential projectiles or face coverings.
A longer march was authorised for Tuesday, with a beefed-up security contingent of 2,500.
At least 24 arrests were made ahead of the march from the historic Place de la Bastille across the Seine to the Place d'Italie in southern Paris.
Tougher Senate version
The right-dominated Senate was to vote in the early evening on its version of the labour reform bill, which is tougher on workers' rights than the lower house version.
The Senate wants to scrap the 35-hour work week and restore a cap on the amount employers would have to pay out when they lose labour disputes.
The bill then returns to the National Assembly on July 5 — already on the hardline CGT union's calendar for another protest.
Last month the government used a constitutional manoeuvre to push the bill through the lower house without a vote in the face of opposition from Socialist backbenchers.
With the two chambers unlikely to agree a final version, the lower house will have the final say, and the government is expected to use the same manoeuvre to pass the bill into law without a vote.
According to an opinion poll published on Tuesday, 73 percent of the French would be “shocked” by such a move.