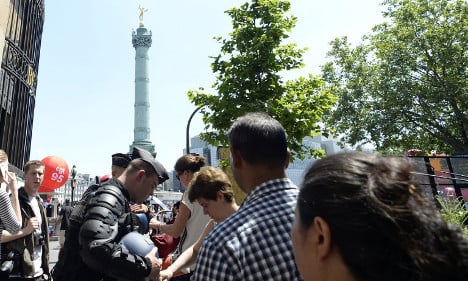 Police carry out bag checks at Thursday's protest. Photo: AFP
The demonstration will see protesters march from Bastille to the Place d'Italie in the 13th arrondissement from 2pm, and comes on the same day that the Senate is set to vote on a hugely controversial labour bill.
Police will be taking no chances after a previous anti-labour reform demonstration turned violent earlier this month, leaving 29 police officers injured and a children's hospital vandalizing as rioters went on a rampage.
Some 2,500 police officers will be on hand to monitor Tuesday's protest, with extra officers to be stationed outside the Pitié-Salpétrière hospital which is along the demo route. Scenes from a demo earlier this month. Photo: AFP
Protesters staged a much calmer demonstration on Thursday, which police confined to a small loop near Bastille that was under extreme police supervision. Although police did arrest around 100 people for carrying objects that could be used as missiles.

Tuesday's protesters will have to go through police frisks and bag checks before entering the demo, as they did last week.
Unions are protesting a series of deeply-unpopular labour market reforms which Prime Minister Manuel Valls had to force through parliament in May to avoid a vote, even after significantly watering down the bill.
The government's disputed labour reforms have seen protests across France since March, with many descending into violence, notably in Paris and the western cities of Nantes and Rennes.
A recent survey found that two in three French people are opposed to the labour bill, which essentially will make it easier for companies to fire and hire workers.
And if the last protest was anything to go by, demonstrators won't be giving up anytime soon.
“We won't stop until they understand,” one marcher told The Local on Thursday. “We are determined and mobilized.”
While the government believes the new reforms will help create jobs, opponents believe the loosening of France's notoriously rigid labour code will lead to greater job insecurity.
However for many, the protests have not only been about the labour reforms but capitalism in general and the growing inequality between the rich and the poor.